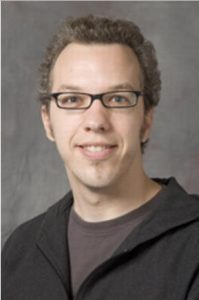 Jan Kautz is presented with the Eurographics “Young Researcher” Award 2007 in recognition of his outstanding contributions to the fast and efficient generation of high-quality, realistic imagery for fully immersive environments and to precomputed radiance transfer.

After graduating from the University of Erlangen-Nuremberg, Jan joined the University of Waterloo, Canada, and received an MMath in 1999. He subsequently returned to Germany as a PhD student at MPI for Computer Science with a focus on real-time rendering. After completing his PhD with distinction in 2003, he joined Fredo Durand’s group at MIT as a post-doctoral researcher. In 2006 he accepted a Lecturer position at University College London.

In his early work, Jan made significant progress towards interactive but realistic renderings of objects with complex surface properties, using graphics hardware. This is a hard problem, as descriptions of realistic materials are often mathematically complex, whereas graphics hardware is good at performing simple operations quickly. In particular, Jan’s thesis proposes new algorithms for bump mapping and shadowing in bump maps, several techniques for glossy reflections using environment maps (using fast prefiltering and the use of spherical harmonics), as well as displacement mapping.

Since joining University College as a faculty member, Jan has further expanded his scope and has initiated new work in realtime rendering (efficient reflectance and visibility approximations, bidirectional texture functions), precomputed radiance transfer for dynamic objects, computational photography, and video-based rendering. Jan is a gifted teacher and mentor, and students he has worked with have always strived.

Jan has consistently published at the highest level (ACM SIGGRAPH, ACM TOG, Eurographics, I3D, and the annual Eurographics Symposia on Rendering and Graphics Hardware), and his work has received considerable and widespread interest. The excellence of his research is further documented by numerous awards, including an nVidia Fellowship, his Doctoral Dissertation Award, the prestigious Otto Hahn Medal of the Max Planck Society, and an Emmy Noether Fellowships by the German Research Foundation (DFG). Few researchers in graphics have received the same amount of recognition for their work at this early stage in their careers.

With his research, Jan has broken new ground and he serves as an inspiration for others.

Eurographics is pleased to recognize Jan Kautz with the 2007 Young Researcher Award as an outstanding individual that will continue to have a profound impact on the field in the years to come.