Each year we have the opportunity to change the photograph which appears on the cover of Computer Graphics Forum, journal of Eurographics, the European Association for Computer Graphics. Therefore we organize a competition for the Eurographics community to find next years cover image. This is your opportunity to show the world what you can do! Upload your images before November 30th 2020. Each picture must have been produced with the aid of computer graphics and must be your own copyright. See the upload page for further details. 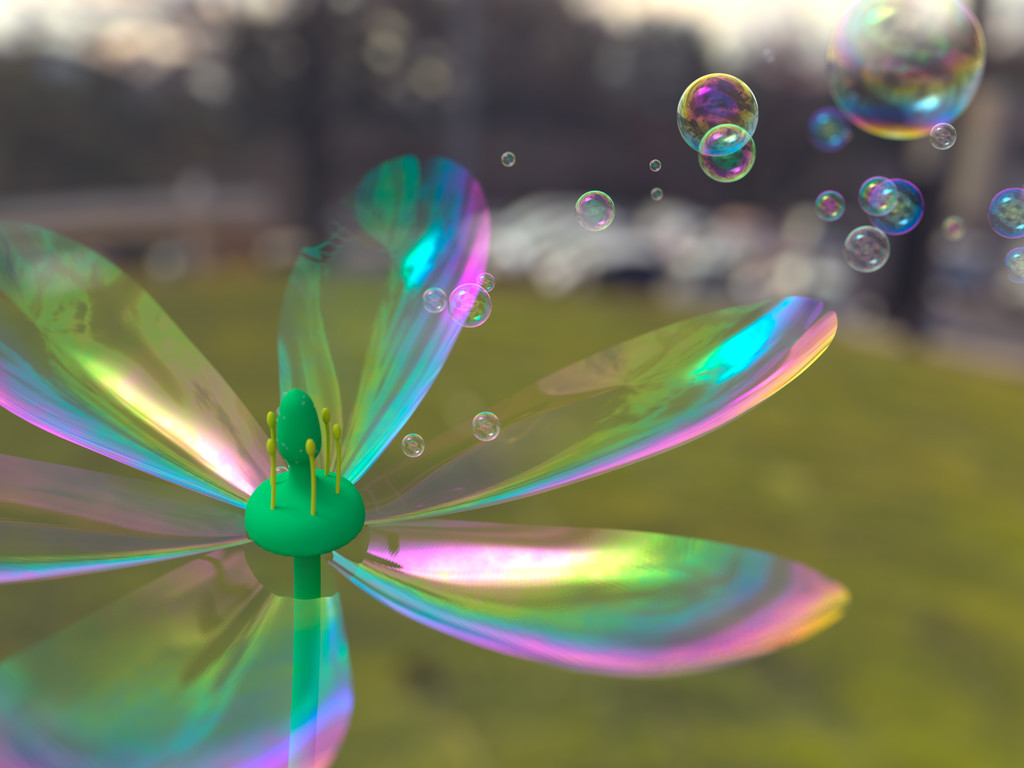 The bubble flower found on the campus of Hiroshima University is a new kind of fantasy plant that has soap bubbles drifted in the wind, just as grasses carry their pollen by the wind. Those who see this flower will remember their childhood and are freed from the tiredness of their hard work.

The flower with thin-film petals was modeled using Blender. The film thickness of each soap bubbles is changed to express different appearances of the interference color. To realistically render the interference color of petals and soap bubbles, we have extended the PBRT renderer to allow full spectral rendering based on wave optics. This extension also allows image based lighting with high dynamic range spectral images. The high dynamic range spectral image was converted from an RGB image of the campus landscape using our newly developed spectral super-resolution method consisting of a deep neural network with ensemble learning. 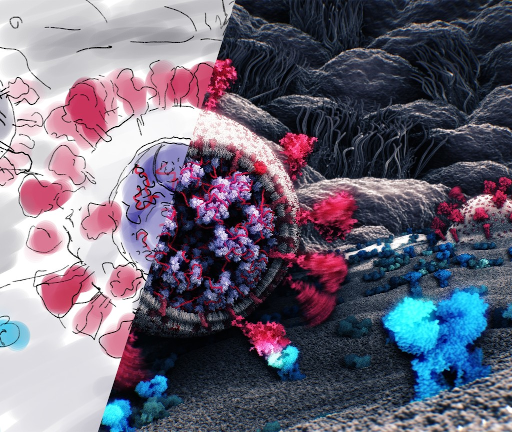 The image shows the process of converting a scientific sketch into a 3D molecular visualization.We see a virion of SARSCoV- 2 whose spike protein has just attached to an ACE-2 receptor of an epithelial cell. To illustrate this process, the scene was roughly sketched by an illustrator. The sketch was then converted into a 3D visualization by using an atomistic model of the virion created by statistical modeling. The scene was then rendered in real-time by an impostor-based molecular visualization algorithm. The virion model is accompanied by the procedurally generated cellmembrane populated by lipids and protein molecules. The background, which shows epithelial cells and their cilia, was modeled and rendered in Blender and composed into the visualization to provide the viewers with a context. 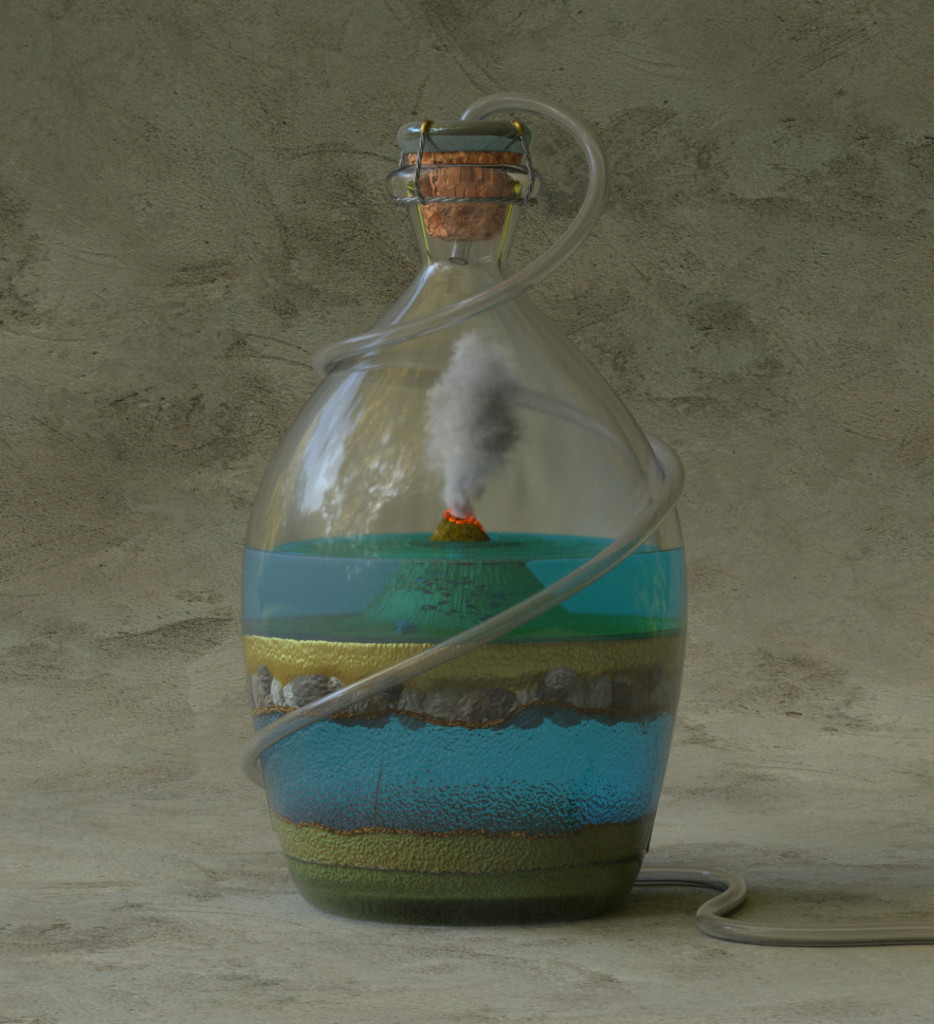 This image shows the “Paradigm” scene from our paper named “Photorealistic Material Editing Through Direct Image Manipulation” paper. In this work, we presented a technique that aims to empower novice and intermediate-level users to synthesize high-quality photorealistic materials by only requiring basic image processing knowledge. Our method takes a marked up, non-physical image as an input and finds the closest matching photorealistic material that mimics this input. The entire process takes less than 30 seconds per material, and to demonstrate its usefulness, we have used it to populate this beautiful scene with materials.

Below, we explain three examples shown in this image (noting that the scene contains more synthesized materials). First, the gold material was “transmuted” from silver by editing the color balance of the image, second, the dirt material below was made by using image inpainting, while third, the vividness of the grass material was done through a simple contrast enhancement operation.

The geometry of the scene was created by Reynante Martinez.

For more information, the entirety of the paper and the described technique are available online. 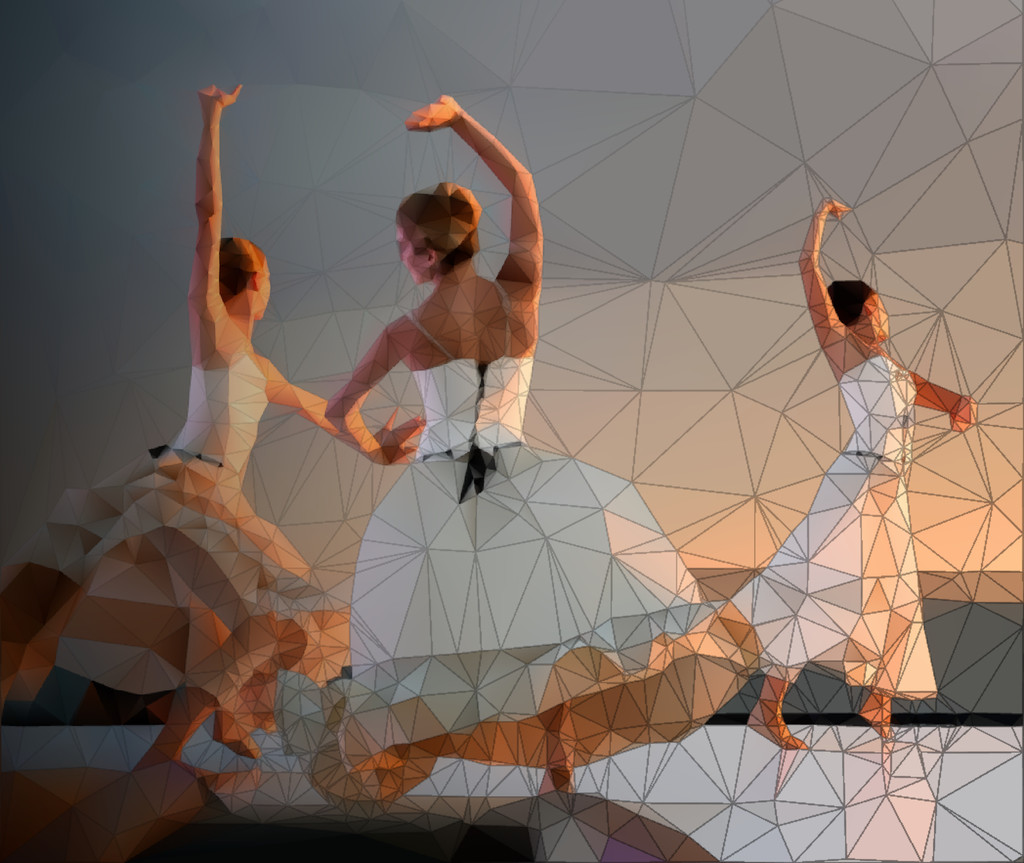 This image shows a triangulation of three ballet dancers at sunset. This stylization was obtained with our interactive and user-centered image triangulation algorithm, which is based on an interactive optimization that places triangles with constant color or linear color gradients to fit a target image. The efficient GPU implementation is described in the paper ‘Stylized Image Triangulation’ by Lawonn and Günther, DOI: 10.1111/cgf.13526. 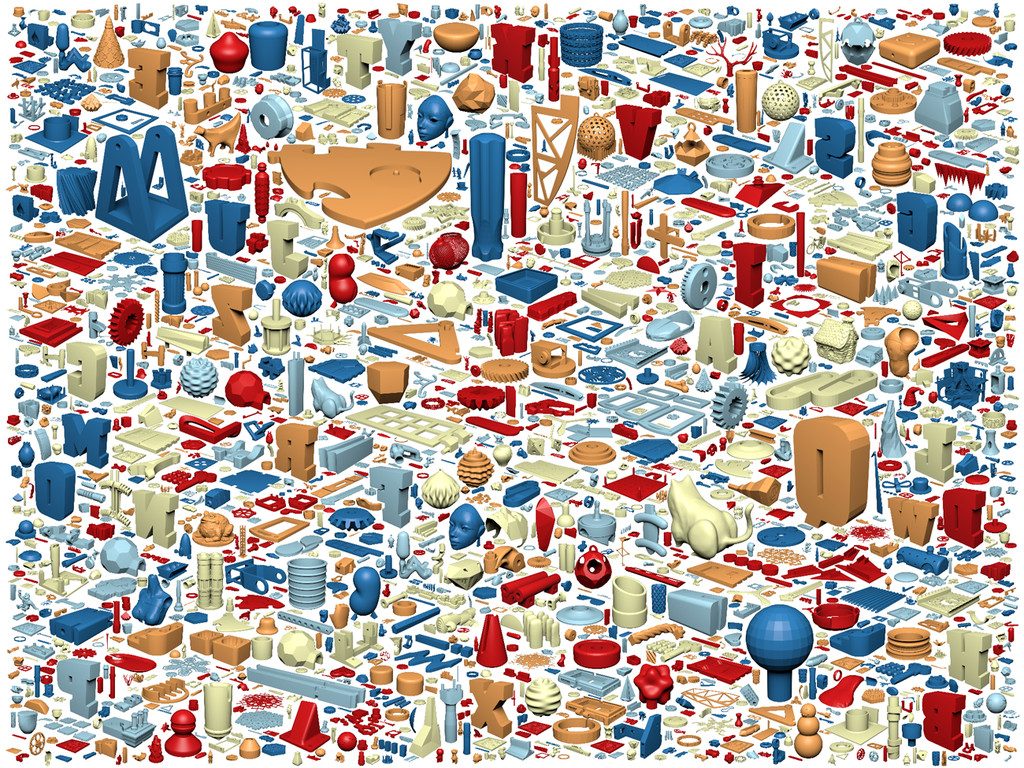 This image shows all 10,000 models that compose the Thingi10k “Thingi10K: A Dataset of 10,000 3D-Printing Models”, winner of the SGP 2017 Dataset Award. The dataset is publicly available and the provided web interface allows filtering on mesh quality and statistics. The image is rendered using Mitsuba and a packing algorithm.