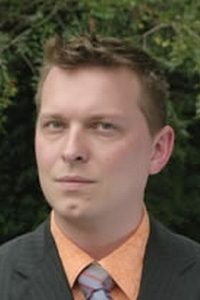 Michael Goesele is presented with the Eurographics Young Researcher Award 2008 in recognition of his outstanding contributions to computer graphics, visual computing and digital media systems.

Michael Goesele studied computer science at the University of Ulm and the University of North Carolina at Chapel Hill and graduated in 1999. He subsequently joined MPI in Saarbrücken as a PhD student and successfully defended his thesis with summa cum laude in 2004. For his thesis Michael was awarded the Eduard Martin Prize for the best PhD thesis by the Faculty for Mathematics and Computer Science at Saarland University. From 2005-2007 he worked as a research associate at the Graphics and Imaging Laboratory (GRAIL) at the University of Washington, supported by a Feodor Lynen Fellowship awarded by the Alexander von Humboldt-Foundation. In 2007 he joined the faculty of TU Darmstadt as an assistant professor (Juniorprofessor).

During his career, Michael has produced a sequence of outstanding results, and his work has impacted computer graphics, computer vision and digital media systems alike.

In his PhD thesis Michael developed pioneering methods for the semi-automatic acquisition and digitization of real world objects and light sources. In addition to reproducing the underlying geometry, the proposed techniques also capture appearance and light reflection as well as the specific light emission pattern of light sources.

The acquired objects and light sources can then be embedded into any virtual scene and can be rendered under arbitrary viewing and lighting conditions. Of particular importance are his technique for evaluating the geometric accuracy of 3D scanning devices (based on measuring the spatial frequency response of the device), his approach for color calibrated BRDF acquisition, his method for measuring and modeling different luminaires by means of light fields, and a technique for the acquisition and rendering of translucent objects.

Equally striking is his work on multi-view stereo reconstruction with applications to Internet community photo collections, initiated during his postdoc stay at the University of Washington.

His results on multi-view stereo stand out both for the simplicity of the proposed algorithm as well as the quality of the reconstruction results, and Michael has quickly built a reputation as a world leader in this highly innovative and dynamic field.

The system developed by him and his colleagues is able to handle large online photo collections (with extreme changes in lighting, scale, clutter, etc. between the different photos), and thus provides an opportunity to use the billions of user-contributed images available online to ‘reconstruct the world’ without relying on specialised equipment.

Michael’s work is an excellent piece of research in a timely but difficult interdisciplinary field, and his results are of interest both from a theoretical and from an application point of view. The outstanding quality of his contributions is also reflected by numerous publications that have appeared in the very best journals and conference venues in the field (ACM Trans. Graphics, ACM SIGGRAPH, ICCV, CVPR, Graphical Models, Computer Graphics Forum etc.).

By his scientific contributions and by his example, Michael Goesele stands out as one of the leading junior authorities in computer graphics, computer vision and digital media systems. With his research Michael has broken new ground. His work serves as a reference and inspires researchers from all over the world.

Eurographics is pleased to recognize Michael Goesele with the 2008 Young Researcher Award as an outstanding individual and a future leader who will shape the field in coming years.