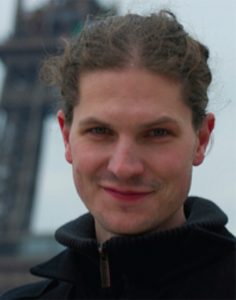 Tobias Ritschel studied Computer Science at the University of Koblenz and received his Ph.D. in 2009 at the Universität des Saarlandes and the Max-Planck-Institut für Informatik under the supervision of Hans-Peter Seidel. He received the Eurographics Thesis Award in 2011. In 2010 he became a Postdoctoral researcher at the Computer Graphics Group of Télécom ParisTech (CNRS). He is now a Senior Researcher at MPI Informatik, Saarbruücken.

The main focus in his early research was on illumination computation, and most notably on the GPU. His work on Imperfect Shadow Maps was a novel and interesting way to accelerate visibility, which is the most expensive part of the  global illumination computation. The main idea is that shadow detection in secondary illumination does not require exact computations, and that a GPU-accelerated subsampling scheme for shadow maps proves to be extremely efficient, while maintaining a reasonable quality. Tobias Ritschel also performed a follow-up study of the perceptual influence of this approximation which appeared in ACM Transactions on Applied Perception. His work on micro-rendering for GPU-based final gathering is also a remarkable idea, allowing interactive frame-rates for high-quality renderings.

More recently he has developed several very interesting results on perception in computer graphics, especially related to stereo viewing. This is an emerging area of central importance. The perceptual disparity model he has developed with co-workers is of great interest, providing a serious study at the hard problems of perception of disparity.  He has also produced a good number of results in other areas, most notably non-photorealistic rendering and data-driven approaches. He has published recent outstanding work including interactive by-example design of artistic packing layouts, a material editing algorithm for complex scenes by surface light field manipulation and reflectance optimization, and the analysis of real-time screen-space scattering in homogeneous environments

Tobias’ work has been always marked by technical excellence, independent thinking, creativity and relevant results. His productivity is remarkably outstanding, with influential publications in top venues (Journals and Conferences). The quality of his work is proven by the high number of citations that his work has received during the last few years.

Eurographics is pleased to recognize Tobias Ritschel with the 2014 Young Researcher Award.