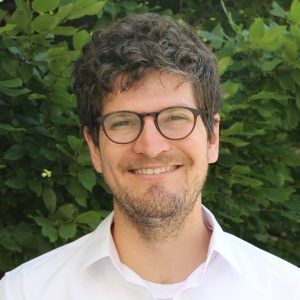 Alec Jacobson finished his PhD at ETHZ in 2013, under the supervision of Olga Sorkine-Hornung. His thesis proposed novel algorithms and interfaces for the real-time deformation of raster images, line graphics, geometric models, and animated characters. He received the ETHZ Medal (awarded to the top 8% of PhD graduates per discipline at ETH) and the Eurographics PhD award. He is presently an Assistant Professor in the Dynamic Graphics Project at the Department of Computer Science of the University of Toronto. He has been working at various well-known international research institutions, including Columbia University and ETH Zürich. He had an Intel PhD Fellowship in 2013.

Alec Jacobson has an impressive record of top publications in the last years, with five ACM TOG papers (Siggraph or Siggraph Asia) in 2014 and 2015 and three Siggraph papers in 2016 and with a number of citations which is rapidly increasing. His paper on Bounded Biharmonic Weights for Real-Time Deformations was also published as a Research Highlight in the Communications of the ACM. His 2012 work on Fast Automatic Skinning Transformations, published also at ACM TOG, provides an efficient tool for computing skinning transformations and controlling articulate shapes and characters. The proposed solution is based on computing the unconstrained degrees of freedom by optimizing nonlinear, rigidity energies, and is able to control disconnected skeletons with shape-aware inverse kinematics. He proposed an approach based on stretchable and twistable bones for skeletal shape deformation, and derived a really elegant and robust inside-outside segmentation algorithm that uses generalized winding numbers.

Most of his top-ranked publications have him as first author. He has given more than 25 invited talks since 2010.

Alec was nominated as a US Junior Oberwolfach Fellow in 2015, and he also obtained the 2015 Eurographics/ACM Symposium on Geometry Processing Software Award for his work and leadership in the “libigl” project, a popular Open Source platform for Geometry Processing algorithms. The libigl library not only covers his work, but also provides re-implementations of algorithms published by other researchers. He is also involved in the gptoolbox project to produce a Geometry Processing ToolBox for MATLAB.

Alec Jacobson is a well-known young researcher with a specialization in Geometry Processing and realtime deformation of 3D models. He has made a number of top relevant contributions with significant impact and has a strongly upward pointing gradient. He is very active in advising PhD students and in international cooperation research initiatives. He was the 2014 Heidelberg Laureate Forum Young Researcher.He received the 2014 Eurographics Annual Award for the Best PhD Thesis.

Eurographics is pleased to recognize Alec Jacobson with the 2017 Young Researcher Award.