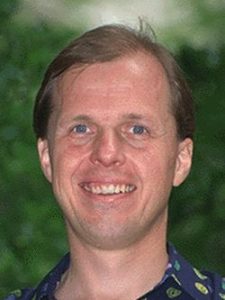 Werner Purgathofer receives the Eurographics Distinguished Career Award 2006 for his diverse contributions to computer graphics, to the training of PhD students and Postdocs, and for establishing Vienna as a center for computer graphics research in Europe.

Werner Purgathofer did his PhD work at TU Vienna under the guidance of Wilhelm Barth and completed his PhD with a thesis titled “Identifikation und verzerrende Skalierung für eine höhere graphische Programmiersprache” in 1984. After his Habilitation in 1987 he was appointed as a University Professor at TU Vienna in 1988.

Purgathofer’s initial contributions focused on stochastic sampling and its applications in ray tracing and radiosity algorithms. Later on he broadened the scope of the Vienna group and, together with Michael Gervautz, Eduard Gröller, Dieter Schmalstieg, Helwig Hauser, and many others, also reached out to application domains such as augmented reality and scientific visualization. These activities eventually culminated in the establishment of the Vienna Competence Center for Virtual Reality and Visualisation (VRVis), co-founded and chaired by him. During his career, Werner Purgathofer has established himself as one of the most prolific European researchers in Computer Graphics, and he has co-authored more than a hundred papers in the field.

Another priority for him has been teaching and the training of PhD students and young researchers. Meanwhile, a total of more than 50 PhDs have been completed within the Vienna Graphics Group, and with the advent of VRVis and the new career opportunities associated with it, several of his former students have meanwhile received tenured researcher of even faculty positions themselves.