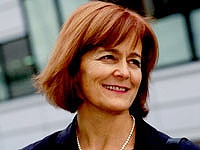 Nadia Magnenat-Thalmann receives the Eurographics Distinguished Career Award 2010 for her interdisciplinary research in the fields of Computer Graphics, Computer Animation and Virtual Worlds, for her establishment of MIRALab as a leading and proliferate research lab in Europe, and for the impact of her work on the synergy between art, fashion and computer graphics.

After having obtained several degrees in Psychology, Biology, Chemistry and Computer Science, Nadia Magnenat-Thalmann got her PhD in Quantum Physics from the University of Geneva. Between 1977 and 1987, she was at University of Montreal where she became a full professor. In 1988 she moved back to Switzerland and founded MIRALab. Throughout these years, she published hundreds of papers, dozens of books, and organized numerous conferences. In recent years, she acts as the Editor-in-chief of two international journals published by Springer and by Wiley.

Among her many scientific contributions, the works on virtual human simulations and dressing animated actors have gained wide recognition from various disciplines. Many of her works are regularly displayed in museums, galleries, and fashion shows, and she won several artistic awards included an Award from the Canadian Council of Art for her work on virtual Marilyn Monroe.