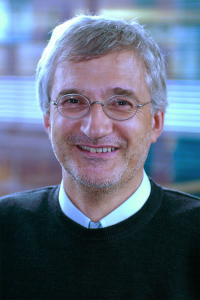 He received a MSc in computer science from the University of  Colorado at Boulder and a PhD in theoretical astrophysics from the University of Tuebingen. His research interests include visualization, computer graphics and human computer interaction in general with a focus on volume rendering, flow and particle visualization, hierarchical and adaptive algorithms for large datasets, parallel and hardware accelerated visual computing systems, graphics for mobile devices and web-based visualization, visual analytics for text collections, trajectories and social media, visual queries, and special user interfaces for the blind.

Thomas Ertl is coauthor of more than 500 scientific publications and he has served as a reviewer for most of the conferences and journals in the field. Prominent visualization research examples are the IEEE Visualization 2000 paper on “Hardware-accelerated volume and isosurface rendering based on cell-projection”, the EG/SIGGRAPH Graphics Hardware 2001 paper on “High-quality pre-integrated volume rendering using hardware-accelerated pixel shading”, the 2003 Computer Graphics Forum paper on “Interactive cutaway illustrations”,  and the IEEE Visualization 2005 paper on “Opening the can of worms: An exploration tool for vortical flows”.  He has been a member of numerous program committees and a papers co-chair for several conferences like Eurographics, IEEE Visualization, EuroVis, IEEE VAST, PacificVis. From 2007-2010, he was Editor-in-Chief of the IEEE Transactions on Visualization and Graphics (TVCG). In 2011/2012 he served as Chairman of the Eurographics Association.

The work of Thomas Ertl has had a deep impact with important contributions on pre-integrated volume rendering, the optimized use of graphics hardware for the real-time exploration of field and particle data sets, texture-based volume and flow visualization, level-of-detail and adaptive volume rendering, cutaway illustrations and transparency, hardware-accelerated remote visualization and frameworks for GPU clusters, semantic web visualization and visual queries, social media analytics, web-based learning platforms, web browsers and indoor navigation systems for the blind and other topics. Thomas Ertl has been strongly involved in the IEEE Visualization Conferences, in EuroVis: the EG/VGTC Conference on Visualization, and in the IEEE Transactions on Visualization and Computer Graphics Journal. He has advised a significant number of PhD students (45 in total). He also has numerous ties to industry and he actively pursues research on innovative visualization applications for the physical sciences, the life sciences, and various engineering domains as well as in the digital humanities.

He received the Outstanding Technical Contribution Award of the Eurographics Association and the Technical Achievement Award of the IEEE Visualization and Graphics Technical Committee in 2006. In 2007 he was elected as a Member of the Heidelberg Academy of Sciences and Humanities. He received Honorary Doctorates from TU Wien in 2011 and from the University of Magdeburg in 2014.

Eurographics is extremely pleased to recognize Thomas Ertl with the 2016 Distinguished Career Award.