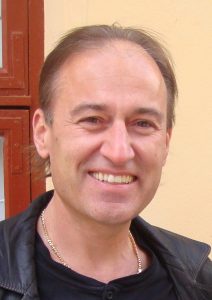 Markus Gross obtained his PhD in 1989 from the Saarland University, and then spent a few years in Darmstadt before moving to Zurich where he founded the Computer Graphics Laboratory in 1994. He is now a Professor of Computer Science at ETH Zurich. In 2008 he became the founding director of Disney Research Zurich (DRZ). Currently he is Vice President for Global Research and Development at Disney Research, being responsible for all of Disney’s research labs globally.

The research interests of Markus Gross include computer graphics, image generation, geometric modelling, scientific visualization, physically based modeling, computer animation, immersive displays, and video technology. Some of his most highly cited work is on point-based graphics (an idea he personally introduced), as well as particle-based fluid simulation. He has published more than 400 papers in graphics and vision. He has graduated more than 56 PhD students, many of which have become highly successful researchers in their own right, not to mention the supervision of dozens of PostDocs at ETH and Disney who are now faculty.

Markus Gross is a member of the Berlin-Brandenburg Akademie der Wissenschaften, the German Academy of Sciences Leopoldina, the Schweizerische Akademie der Technischen Wissenschaften (SATW), and a member of the National Academy of Engineering of Korea. He has received a multitude of awards, including the 2015 IEEE Visualization Distinguished Career Award, and the Karl Heinz Beckurts Prize for outstanding technological innovations with strong practical relevance. Also in 2013, Gross received the Konrad Zuse Medal of the German Association of Computer Science (GI), the highest award for scientific achievements in computer sciences in Germany. From the Academy of Motion Picture Arts and Sciences Markus Gross received the Technical Achievement Award together with Nils Thuerey, Theo Kim, and Doug James for the development of a procedure to simulate smoke and explosions more efficiently. From Eurographics he received the Outstanding Technical Contributions Award in 2010 after becoming a Fellow of the Association in 2006.

Eurographics is extremely pleased to recognize Markus Gross with the 2018 Distinguished Career Award.