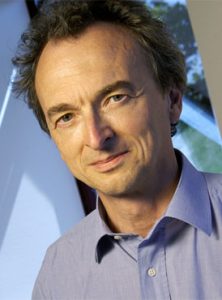 Claude Puech receives Eurographics’ first “Distinguished Career Award” for his fundamental contributions to Computer Graphics and Computational Geometry, his continued role in training young researchers in these fields, and his success in promoting the development of world-class research in computer graphics in Europe.

Claude Puech graduated in mathematics from the prestigious “Ecole Normale Supérieure” (ENS) in Paris, France. After a few years as a faculty member at the Universities of Rouen and Paris 5, and a “Thèse d’Etat” in computer science at the University of Paris-Sud/Orsay, he became in 1985 the first professor of computer science at ENS, founder and director of the Computer Science Laboratory.

He has published a wide range of papers with contributions both in highly theoretical fields and more applied areas, and his work has appeared in the very best journals and conferences.

His pioneering work on geometry representations and hierarchical data structures led him to establish new research directions in computer graphics, including rendering, geometric modeling and animation. One of his long-lasting and still vivid subject of interest is the design of efficient visibility algorithms.

In 1992, Claude Puech moved to Grenoble as a professor at University Joseph Fourier. He developed there the iMAGIS research group he had previously founded at ENSinto one of the best research labs in computer graphics in the world. He has inspired a number of graduate and post graduate researchers over more than a decade, and several of his former students are now among the most widely know researchers in the field.

Since 2002, Claude Puech continues to demonstrate his enthusiasm and creative abilities as the first director of INRIA’s newest research unit “FUTURS”.

Through his work and example Claude Puech has significantly advanced the field of computer graphics, and Eurographics is pleased to recognize Claude Puech with the 2004 Distinguished Career Award.