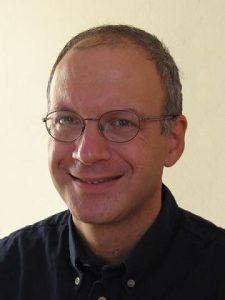 George Drettakis is the recipient of the Eurographics “Outstanding Technical Contributions” Award 2007 in recognition of his outstanding work on realistic and perceptually validated image and sound rendering for interactive applications.

George Drettakis received a Bachelor of Science degree in Crete (Greece), and and M.Sc. and Ph.D. from the University of Toronto (Canada), under the supervision of Eugene Fiume. He is now a senior researcher at INRIA in Sophia-Antipolis (France), where he heads the REVES research group that he founded in 2001.

The contributions of George Drettakis to the field of interactive rendering are varied but all have had a significant impact: his work on visibility calculations (SIGGRAPH 1994, 1997, 2000, 2002) demonstrated the possibility of performing practical yet accurate calculations. He proposed several techniques for hierarchical global illumination based on a thorough analysis of the importance of all transport processes (SIGGRAPH 1995, 1997, 2007, Eurographics 1998, 2001). He was a pioneer in developing rendering algorithms for augmented and virtual reality (EGSR 1997, IEEE TVCG 2000) using a mixture of synthetic and real imagery. He investigated the use of alternative representations using sprites or points (Eurographics 1997, IEEE CG&A 2004), and introduced improved rendering algorithms for shadows and reflections (SIGGRAPH 2002, EGSR 2006). Last but not least, he has developed and disseminated his vision of interactive virtual environments using new rendering tools such as non-photorealistic rendering, sketching and perceptually-based sound (SIGGRAPH 2004, I3D07) and graphics (EGSR 2007).

George Drettakis is a true scientific leader and has created a very successful research group at INRIA, where he advised many graduate students and postdocs who have themselves become productive researchers. He has also demonstrated considerable leadership potential to computer graphics research in Europe, for instance as co-chair of Eurographics 2002 and 2008 and his coordination of European projects. His total contribution to the Eurographics Symposium on Rendering – which he co-chaired in 1998 – is superb, with sixteen papers.

George Drettakis has established himself as a leader and scientific role model for young researchers in Europe, combining absolute scientific excellence with the ability to collaborate with the best scientists worldwide.