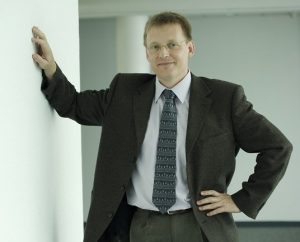 François Sillion is presented with the Eurographics “Outstanding Technical Contributions” Award 2009 in recognition of his outstanding contributions to rendering in computer graphics, and in particular in the fields of global illumination, visibility, image-based ap-proaches and expressive rendering.

François is a senior researcher at INRIA, the French National Institute of research in computer science and applied mathematics. He graduated from the prestigious Ecole Normale Supérieure (ENS) in Paris in 1989, with a PhD specializing in computer graphics. After a two-year postdoctoral fellowship at Cornell, he became a CNRS researcher at ENS. His laboratory moved to Grenoble, to become the iMAGIS research group. François later took up a position as a researcher at INRIA while in Grenoble. Throughout this period François held a teaching appointment at the top French engineering school Ecole Polytechnique (1992-2004).

François is undoubtedly one of the most influential researchers in computer graphics in Europe. His work on radiosity computations and global illumination in general, including his book with C. Puech on the topic, are central references in the domain. His seminal 1989 SIGGRAPH paper, which generalized the radiosity method, and the follow-up papers during his postdoctoral fellowship, spawned an entire body of work in the field, with numerous citations and extensive supplementary results.

François’s contribution was also central in work related to image based methods, such as some of the first work on “impostors” which later achieved widespread acceptance, or on expressive rendering, for example concerning line drawings and their simplification. Recent work with his colleagues on the Fourier analysis of illumination has opened a novel and exciting perspective in this mature field.

François’s publication record is truly exceptional: he has published close to one hundred papers in the best international journals and conferences in our domain. Many of his papers are widely cited and have been influential in many domains. He recently co-authored with Julie Dorsey and Holly Rushmeier a comprehensive book on “Digital Modeling of Material Appearance”. François has actively participated in numerous program committees of all leading events in the field (ACM SIGGRAPH, Eurographics, EG Symposia, etc.) and he has successfully co-chaired several of these (Eurographics, NPAR, Pacific graphics etc.).

François Sillion’s leadership skills have been proven on many occasions. He chairs the Eurographics workgroup on rendering, and was central in the success of the corresponding symposium, which has become a major event worldwide.  He also created and led the ARTIS INRIA research group (2003-2007). Under his guidance, ARTIS has produced several excellent graduate students and an impressive set of top-quality international research results. Since 2007 he holds the position of director of the entire INRIA research centre in Grenoble, which is home to several hundred researchers.

With his impressive achievements and exceptionally high intellectual standards, François Sillion has been a major force in shaping today’s high quality research landscape of computer graphics in Europe. Eurographics is extremely pleased to recognize François Sillion with the 2009 Outstanding Technical Contributions Award.