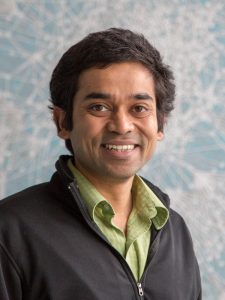 Niloy Mitra is a Professor in the Department of Computer Science at University College in London where he leads the Smart Geometry Processing Group. He received his Bachelor’s degree from IIT Kharagpur, and his Master’s and PhD degrees from Stanford University. Before establishing his position at UCL in 2011, he was a postdoctoral scholar at TU Vienna, and an assistant professor at IIT Delhi and KAUST.

Niloy has an extraordinary record of outstanding research contributions in the areas of shape analysis, data-driven geometry processing, and computational fabrication. In recognition of his research, he has received the ACM SIGGRAPH Significant New Researcher Award for “his outstanding work in discovery and use of structure and function in 3D objects” in 2013, and the BCS Roger Needham award in 2015 for “distinguished research contribution in computer science”. His work has been funded by an ERC Starting Grant on SmartGeometry, ERC Proof-of-Concept Grant, a Google Faculty Fellowship, and was twice featured as research highlights in the Communications of the ACM.

Niloy’s research spans a range of problems focused around representing, analyzing, processing, fabricating, and editing 3D shapes for computer graphics applications. He has contributed widely used algorithms on fundamental aspects such as normal estimation in noisy data, geometry completion, and local and global shape alignment. As an example, his technique for surface registration based on 4-point congruent sets has introduced a highly original approach to the problem of shape registration and been established as a standard approach in many practical scenarios. He further pioneered research on symmetry and structural regularity detection in 3D objects, contributing several algorithms that have become building blocks for a variety of applications. This work inspired structure-aware geometry processing, an entire subfield in 3D geometry processing that is concerned with detecting and exploiting regular structures in 3D shapes to address various problems, including shape registration, completion, manipulation, and reconstruction. A further core theme in Niloy’s work is the problem of representing entire shape collections in order to support operations such as interactive modeling, shape space exploration, and analysis including classification, segmentation, and functionality detection. He has broken new ground in this area by introducing a number of highly innovative problem statements and proposing creative and sophisticated data-driven solutions. His work showed how to leverage novel shape representations and algorithms in a number of applications, for example to explore shape collections that fulfill physical constraints, ensure that they can be fabricated, provide an intended functionality, or synthesize new editable geometric content. Niloy’s work undoubtedly has made an extraordinary impact in the academic research community and in industry. He has been granted several patents, and his academic publications appear regularly in the top journals and conferences in the field, receiving thousands of citations every year.

In addition, Niloy has provided outstanding service to the research community. He has served as the SIGGRAPH Asia Course Chair in 2016, as the conference chair for Advances in Architectural Geometry (AAG), the SIGGRAPH Asia Workshop on Indoor Scene Understanding both in 2014, and Symposium of Geometry Processing in 2017. He has been program chair for several conferences such as Geometric Modeling and Processing 2019, Pacific Graphics 2015, Symposium on Geometry Processing 2012, and Shape Modeling International 2011. In addition, he has served as an associate editor for ACM Transactions on Graphics, Computer Graphics Forum, IEEE Transactions on Visualization and Computer Graphics, the Visual Computer, and Computers & Graphics, not to mention the dozens of conference program committees he has participated in. Finally, he is in high demand as a speaker for conference keynotes and invited talks, including keynotes at the Eurographics, the Symposium on Geometry Processing, Vision, Modeling, and Visualization conference, ACM CAD/Graphics, and Pacific Graphics.