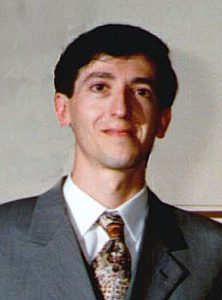 Paolo Cignoni is the recipient of the first Eurographics “Young Researcher” award in recognition of his outstanding contributions to the development and use of advanced multiresolution techniques in computer graphics and scientific visualization.

Paolo Cignoni received a M.S. in Computer Science in 1992 and got his PhD in 1997 at the University of Pisa with a thesis titled “Scientific Visualization based on Simplicial Complexes”. He never definitively left this nice Tuscany town where he still works as a researcher at ISTI – CNR and has an appointment at the Computer Science Department of the University of Pisa.

One characteristic of Paolo Cignoni’s research is the combination of sound theoretical analysis with a good taste for practically relevant problems. He has been one of the most prolific researchers in the field and despite his youth he already published more than 30 research papers in the best journals and conferences, including six papers at the Eurographics annual conference series, and three papers at Siggraph’04.

The scope of his work ranges from scientific visualization to LOD techniques. In volume visualization he proposed an optimal solution for the search of volume cells crossed by an isosurface and various simplification algorithms and multiresolution data structures to support the efficient management and visualization of scalar fields defined over tetrahedral complexes.

He was one of the driving forces behind the development of Metro, a widely used tool for evaluating different simplification algorithms by measuring the Hausdorff distance between different geometric objects, and he wrote several seminal papers on how to approximate complex high resolution models by low resolution models enhanced with detail maps (normal/bump/color).

Most recently, his research focused on the issue of huge models management, where he presented one of the first high quality out-of-core simplification algorithms (selected to simplify the Digital Michelangelo models), and proposed a novel approach to variable resolution rendering (using cache coherence and graphics primitive batching) where the real-time selection of variable LODs is performed on a coarse-grain hierarchical structure whose nodes hold patches of the geometry. These “GPU-friendly” data structures have been proposed for the efficient rendering of planet-sized digital terrains and huge 3D models. In addition, his work has found important applications in 3D scanning and cultural heritage.

Eurographics is pleased to recognize Paolo Cignoni with the 2004 Young Researcher Award as an outstanding individual that will continue to shape Computer Graphics in the years to come.