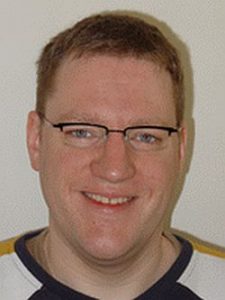 Hendrik Lensch is presented with the Eurographics Young Researcher Award 2005 in recognition of his outstanding contributions to Computer Graphics with a focus on Reflectance Measurement and Dual Photography.

Hendrik did his PhD work at MPI for Computer Science under the supervision of Hans-Peter Seidel and completed his doctoral degree with a thesis titled “Efficient, Image-Based Appearance Acquisition of Real-World Objects” in 2003. In 2004 he joined Stanford University as a visiting assistant professor working with Marc Levoy.

The automatic aqcquisition of real world objects is a crucial step in the creation of convincing looking digital scene content, and it greatly enhances the realism in synthetic imagery. In his dissertation he demonstrated that the reflection properties of opaque objects can be determined quite faithfully from only a small number of images (20 – 30) with constrained illumination. The technique is based on a clustering approach. The captured models allow for rendering from arbitrary view points and under arbitrary lighting conditions. This makes it possible to incorporate the captured objects into any virtual scene.

During his stay in Stanford, Hendrik further expanded the scope of his research, and in particular became interested in the question to what extent the optical properties of a whole scene (not just a single object) consisting of arbitrary materials can actually be reconstructed from (how many?) images. This question eventually led to the method of dual photography, jointly developed by Hendrik and others. Basically, by exploiting first principles from physics (Helmholtz reciprocity) together with well structured incident illumination, the technique allows to create surprising views from positions where no camera was present.

The results of Hendrik’s work have been published in the premier journals and conferences of the field (including ACM SIGGRAPH, Eurographics, ACM TOG, EG Symposium on Rendering), and his combined understanding of both the practical and theoretical issues involved in his work is really special. With his research, Hendrik has broken new ground and he serves as an inspiration for others.

Eurographics is pleased to recognize Hendrik Lensch with the 2005 Young Researcher Award as an outstanding individual that will continue to have a profound impact on the field in the years to come.