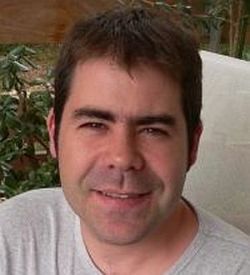 Pierre Alliez is presented with the 2005 Eurographics Young Researcher Award, in recognition of his outstanding contributions to Computer Graphics and Geometry Processing.

Pierre Alliez received a PhD from the “Ecole Nationale Supérieure des Télécommunications” (ENST) in Paris in 2000, on the topic of geometry compression. He then joined the University of Southern California in Los Angeles and started working with Mathieu Desbrun as a post doc. He was hired by INRIA in Sophia-Antipolis in 2002 in the Geometrica research team.

Pierre Alliez’s research focuses on the manipulation of geometric shapes, and in particular on processing discrete geometry. Particular topics on which he has contributed outstanding and innovative results include geometry compression, surface approximation, reconstruction from sampled data, mesh parameterization, mesh generation and surface remeshing.

A particularly striking aspect of Pierre Alliez’s research is his ability to achieve a balance between the rigorous mathematical analysis and a constant attention to the practicality of the proposed solutions. His development of geometric processing algorithms is always backed by impressive demonstrations of practical usage.

Pierre Alliez has played an important role in the development of the geometry processing community, and the recognition of this research area as an important discipline of Computer Graphics. Eurographics is very pleased to present him with the 2005 Young Researcher Award, and to compliment him on his successful and promising early career.