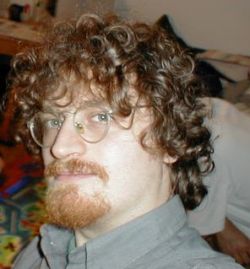 Marco Tarini is presented with the 2006 EUROGRAPHICS “Young Researcher” Award 2006 in recognition of his outstanding contributions to Computer Graphics.

Marco is a prolific researcher who contributed to several areas within graphics, such as real time rendering, 3D acquisition techniques and visualization. Many of his works concern texture mapping, focusing on the seamless parameterization of shapes with arbitrary topology, the embedding of infinite precision vectorial features into 2D textures, or the synthesis and rendering of detail textures produced from huge geometric models. In the field of 3D acquisition, he presented innovative ideas for the reconstruction of mirroring surfaces, a volumetric data structure for shape from silhouettes acquisition, and a solution for the acquisition of facial features from pictures. More recently he contributed to molecular visualization, specializing advanced rendering techniques – both realistic and illustrative – to the case of huge molecular structures. A common denominator of much of his work is the capability to design solutions that stress “GPU-friendliness”.

A characterizing aspect of Marco’s research is his enthusiasm, his capability to inspire and share ideas with colleagues and his willingness to cover different research fields. As an example of his multiform attitude to research, he frequently directs his investigation efforts to the recollection of lost valuable items (keys, identity documents, flight tickets, etc.).

Eurographics is pleased to recognize Marco Tarini with the 2006 Young Researcher Award as an outstanding individual that will continue to shape Computer Graphics in the years to come.