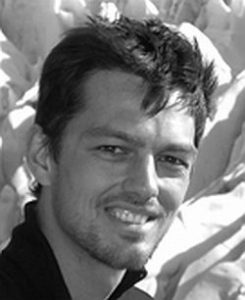 Mark Pauly is presented with the EUROGRAPHICS “Young Researcher” Award 2006 in recognition of his outstanding contributions to Computer Graphics and Geometric Modeling.

Mark received his Ph.D. in 2003 at ETH Zurich under the supervision of Markus Gross. From 2003-2005 he was a postdoctoral scholar at Stanford University. Since 2005, he holds a junior faculty position at ETH and directs the newly established Applied Geometry Group. Mark Pauly started his career in the field of point based modeling. In his Ph.D. thesis he devised several novel methods for digital processing, filtering, and editing of point clouds which combined the simplicity of image-based editing with the power of more complex 3D modeling. In addition, Pauly designed various powerful algorithms for the interactive modeling and deformation of point sampled representations. He was one of the key researchers who developed Pointshop3D, a widely used Open Source software package. In addition, Mark Pauly worked successfully on problems related to physically-based simulation of deformable objects, facture, contact and fluids and he investigated the problems of shape completion and symmetry.

In most of his scientific work, Mark focused on the control and analysis of surfaces represented by point samples. All of his work compels by its balanced combination of profound concepts and practical utility. His publications include an excellent record of EUROGRAPHICS and ACM SIGGRAPH papers. With his contributions, Mark Pauly has broken new ground and helped to pioneer an entirely new field within Computer Graphics. He has made a great international impact and serves as an inspiration for others.

Eurographics is pleased to recognize Mark Pauly with the 2006 Young Researcher Award as an outstanding individual that will continue to shape Computer Graphics in the years to come.