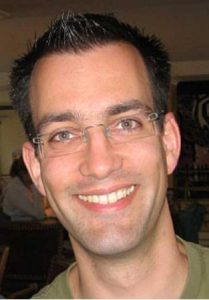 Eurographics presents this year’s Young Researcher Award to Mario Botsch in recognition of his outstanding contributions to the field of geometric modeling and digital geometry processing.

Mario Botsch received a B.S. and M.S. degree in applied mathematics and computer science, both from the University of Erlangen-Nuremberg, Germany. From 1999-2000 he worked as a research associate in the Computer Graphics Group at MPI in Saarbrücken, Germany. In 2001 he moved to RWTH Aachen, from where he received his Ph.D. under the supervision of Leif Kobbelt. In 2005, he joined the Computer Graphics Laboratory at ETH Zurich, where he holds a senior lecturer position.

The main scientific focus of Mario Botsch’s work lies in the field of polygonal mesh modeling with an emphasis on shape deformation. With a series of milestone research results he helped significantly to gain insight into and profound understanding of the properties and limitations of deformation methods for 3-dimensional geometry. For instance, his SIGGRAPH 2004 and Eurographics 2005 papers present an intuitive framework for real-time shape deformations. Subsequent publications at the Symposium of Geometry Processing (SGP) and in IEEE TVCG addressed important features and limitations of such deformation algorithms. While his earlier work was focused on linear deformation models, more recent results demonstrate the superiority and practical relevance of nonlinear deformation methods. Most notably, his PriMo framework computes thin shell behavior for intuitive mesh deformation. This paper won the best paper award of SGP 2006 and exemplifies Mario Botsch’s central vision of “physically-inspired geometric modeling”. This vision is further underpinned by follow-up work at Eurographics 2007 and SIGGRAPH 2007. In addition to his research on polygonal mesh processing, Mario Botsch contributed significantly to the development of point-based graphics. In particular, his improvements of GPU-based surface splatting serve as a reference implementation for high-quality point rendering.

Besides his core scientific contributions he was also one of the key researchers who developed OpenMesh, a very successful and widely used software package for polygonal mesh processing.

Mario Botsch’s scientific work compels by its profound mathematical analysis and its deep insight into the nature of the computational algorithms inherent to our field. His research is also characterized by his balanced sense for applications and implementations, and his publications include an excellent record of Eurographics and ACM SIGGRAPH papers.

By his scientific contributions and by his example, Mario Botsch stands as one of the leading junior authorities in digital geometry processing who has made significant international impact. His work serves as a reference and inspires researchers from all over the world.

Eurographics is pleased to recognize Mario Botsch with the 2007 Young Researcher Award as an outstanding individual and a future leader who will shape our field in coming years.