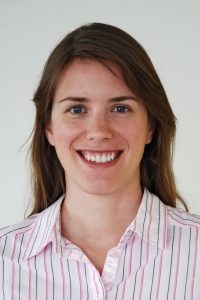 Olga Sorkine is presented with the Eurographics Young Researcher Award 2008 in recognition of her outstanding contributions to interactive geometric modeling, shape approximation, and shape and image manipulation.

Olga Sorkine received the BSc degree in mathematics and computer science from Tel Aviv University in 2000, and a PhD from the School of Computer Science at Tel Aviv University in 2006. She is currently doing a postdoc at TU Berlin funded by a Humboldt fellowship. Olga has accepted an assistant professor position at NYU’s Courant Institute of Mathematical Sciences and will start there in the fall.

Olga’s research interests are in interactive geometric modeling, shape approximation, and shape and image manipulation. During her career, she has significantly advanced the field, and several results deserve extra mentioning.

Laplacian Surface Editing techniques developed by Olga and colleagues allow intuitive and interactive surface deformation through easy manipulation paradigms, while preserving important surface detail. The framework enables various surface processing operations, such as compact representation, editing and metamorphosis. It is especially effective for shapes with abundant surface detail, such as those obtained by 3D scanning technologies.

The general framework can also be extended to the manipulation of images and arbitrary 2D shapes. Further important applications of the Laplacian processing framework are in shape compression (compression of surfaces with high amount of detail by quantizing differential coordinates) and mesh optimization. Other important contributions by Olga include her early papers on surface parameterization and texturing and her recent work on expressive non-realistic modeling, example-based skin animation and sketch-based modeling.

Olga’s work equally stands out, both for its sound mathematical analysis, and for its immediate practical relevance.

Olga’s work has been published in the very best journals (ACM Transactions on Graphics, IEEE Transactions on Computer Graphics and Visualization, Computer Graphics Forum, International Journal on Shape Modeling) and conference proceedings (ACM SIGGRAPH, Eurographics, IEEE Visualization, Symposium on Geometry Processing, Shape Modeling International) in the field, and she has kept a steady presence on the technical program committees of all leading events in her area.

With her research Olga has broken new ground, and she serves as an inspiration for others.

Eurographics is pleased to recognize Olga Sorkine with the 2008 Young Researcher Award as an outstanding individual that will continue to have a profound impact on the field in the years to come.