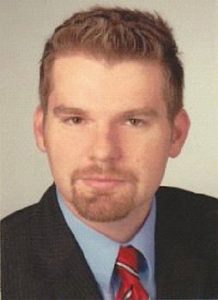 Christian Theobalt is presented with the Eurographics Young Researcher Award 2009 in recognition of his outstanding contributions to 3D video processing and markerless motion capture.

Christian’s research interests are in 3D video processing and markerless optical motion capture. During his career, he has significantly advanced these fields, and several results deserve extra mentioning.

In his dissertation Christian presented a method to reconstruct and render free-viewpoint videos of human actors. By combining a silhouettel-based analysis-by-synthesis approach with a dynamic texturing method, human performances can be realistically rendered in real time from arbitrary synthetic perspectives. His SIGGRAPH paper on the topic has already become a classic in the field and has attracted more than 200 citations.

During his postdoc stay at Stanford he has significantly extended this framework and proposed a new marker-less approach to capturing human performances from multi-view video. The algorithm successfully combines the power of surface- and volume-based shape deformation techniques with a new mesh-based analysis-through-synthesis framework. The framework extracts motion constraints from video and makes a laser scan of the tracked subject mimic the recorded performance.  Small-scale time-varying shape detail is recovered by applying model-guided multi-view stereo to refine the model surface.  The algorithm can jointly reconstruct spatio-temporally coherent geometry, motion and textural surface appearance of actors that perform complex and rapid moves, and it can even capture performances of people wearing wide apparel, such as a dancer wearing a skirt.

Christian’s work equally stands out, both for its sound mathematical analysis, and for its immediate practical relevance. The excellence of his research is further documented by several  awards, including
an ATI Fellowship, his Doctoral Dissertation Award, and the prestigious Otto Hahn Medal by the Max Planck Society.

With his research Christian has broken new ground, and he serves as an inspiration for others. Eurographics is pleased to recognize Christian Theobalt with the 2009 Young Researcher Award as an outstanding individual that will continue to have a profound impact on the field in the years to come.