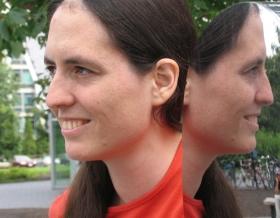 Anat Levin is awarded the 2010 Eurographics Young Researcher Award, in recognition of her outstanding contributions to computational photography and image matting for computer graphics.

Anat Levin completed her PhD at Hebrew University in 2006 under the supervision of Yair Weiss, with a thesis titled “Learning and inference in low level vision”. In 2007 she joined MIT as a postdoc working with Bill Freeman and Fredo Durand. In 2009 she became an assistant professor at the Weizmann Institute of Science.

Digital matting, the process of extracting a foreground object from an image with an opacity estimate, is an important task in image and video editing. Levin has contributed significantly to simplify and partially automate this process. In particular, she developed a closed form solution to natural image matting, and established its relation to spectral segmentation algorithms.

During her postdoc stay she worked on computational photography, developing new ways to manipulate digital images, with an emphasis on a unified design of the camera and the post processing algorithm. Her work on motion-invariant photography presents a camera and algorithm that, together, remove motion blur from an image: The camera moves its sensor horizontally at a varying speed while the image is being exposed, which of course makes the whole image blurry. However, the camera’s movement is specially designed to blur the moving and static parts of a scene equally, and by a known amount, and so the blur can be removed from all objects in post processing, in a single uniform deblurring step, without estimating the motion velocity and without segmenting the moving parts of the image.

In recent work she has proposed a lens design that would give a camera greater depth of field, increasing the amount of a scene–near and far–that can be brought into focus at the same time. Moreover, Levin derived a mathematical upper bound on the maximal amount of information which can be preserved by an extended depth of field system and proved that her new design approaches optimality.

Anat’s work equally stands out, both for its sound mathematical analysis, and for its immediate practical relevance.

Eurographics is very pleased to recognize her with the 2010 Young Researcher Award.