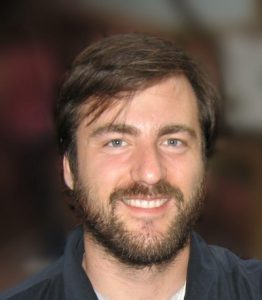 Sylvain Lefebvre is presented with the Eurographics Young Researcher Award 2010 in recognition of his outstanding contributions to texturing and texture synthesis and the development of novel data structures for computer graphics.

Sylvain Lefebvre received his Master in Computer Graphics in 2001 at the INP Grenoble, and a Ph.D. under the supervision of F. Neyret from the Université Joseph Fourier in Grenoble in 2005. He was a postdoctoral fellow at Microsoft Research in Redmond, US in 2005-2006 and was appointed permanent researcher at INRIA in 2006, in the group REVES (Sophia-Antipolis). Since January 2010, he is with the ALICE group (Nancy).

Sylvain Lefebvre’s research interests are in advanced texturing, real-time texture synthesis, fast texturing and modeling solutions as well as advanced and efficient data structures for computer graphics. Sylvain has made major contributions in each of these domains, and has established himself as a leader in each.

Sylvain broke significant new ground with his work with H. Hoppe on real-time texture synthesis. This algorithm, designed to fully exploit the massively parallel architecture of modern GPUs, offers both unprecedented synthesis speed and new levels of editability thanks to controlled addition of randomness. Sylvain extended this work to achieve anisometric synthesis, texture advection, and volume texture synthesis with local evaluation. With colleagues, he recently introduced a novel noise primitive based on the Gabor kernel, offering powerful spectral control and filtering, and directly defined on surfaces. These texture synthesis algorithms are the state-of-the-art in the field, and have direct impact in all applications requiring rich varieties of textures. Sylvain contributed other by-example and semi-automatic texturing and modeling techniques, with the continued goal of letting users easily create and explore rich content in applications using 3D virtual worlds.

Sylvain’s work has been published at the very best conferences in the field (Eurographics, ACM SIGGRAPH, ACM Symposium on 3D Graphics and Games, EG Symposium on Rendering), most of which appear as special issues of the top graphics journals (ACM Transactions on Graphics, Computer Graphics Forum). Sylvain has participated in program committees of all the leading events in the field.

Eurographics is pleased to recognize Sylvain Lefebvre with the 2010 Young Researcher Award.