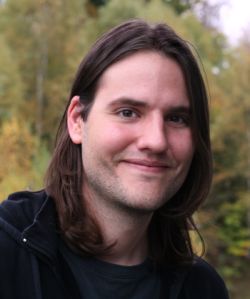 Elmar Eisemann graduated from the prestigious Ecole Normale Superieure in Paris and did his PhD work at INRIA Grenoble (Supervisors: F. Sillion and X. Decoret) in the ARTIS group. During his Ph.D. he performed several internships/research visits at MIT (F. Durand 2003 and 2008),

U. Illinois (J. Hart, 2006) and Adobe (D. Salesin (2007) and S. Paris (2008)). He received his Ph.D. in September 2008. From 2008-2009 he was a senior scientist and group leader at Saarland University/MPI Informatics in the Cluster of Excellence on Multimodal Computing and Interaction (MMCI). In Dec. 2009 he joined Telecom ParisTech as an Associate Professor.

Elmar’s Ph.D. work was mainly on real-time rendering and alternative representations. His work on fast scene voxelization and applications presented a novel way to voxelize scenes entirely on the GPU in an extremely efficient manner, with applications to shadow algorithms, refraction and reflection. Other results of his Ph.D. include careful work on error bounds for view-dependent simplification, shadows and visibility.

His work on flash photography enhancement via intrinsic relighting (SIGGRAPH 2004) has already had significant impact both in computer graphics and vision. A flash and a no-flash photograph of a scene are combined by using and adapting the bilateral filter to extract details and color from the flash image and overall ambiance from the no-flash image. An interesting set of additional capabilities are provided, such as inverse white balancing and the introduction of the joint/cross bilateral filter.

The above work, together with many other results, has been published at top-level conferences and journals (Eurographics, SIGGRAPH, SIGGRAPH Asia, EGSR). Elmar Eisemann has already produced many significant and inﬂuential contributions to several areas of computer graphics, including computational photography, visibility and shadows, and more recently vector graphics.

Eurographics is pleased to recognize Elmar Eisemann with the 2011 Young Researcher Award.