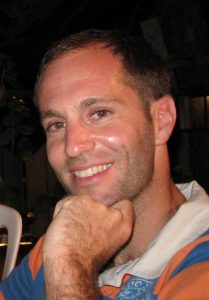 Andrei Sharf received his Ph.D. in 2007 from Tel-Aviv University, under the supervision of Daniel Cohen-Or and Ariel Shamir. He is currently a senior lecturer/assistant professor at the Ben-Gurion University. In 2007-2009, he spent two years as a Postdoctoral Fellow at UC-Davis and in 2009/2010 he spent a year as a Visiting Associate Professor at the Center of Visual Computing, Shenzhen, China.

Andrei’s research focuses on problems related to processing of 3D point clouds. He worked on algorithms for analysis, reconstruction and approximation of shape surfaces from imperfect data typically generated by range scanners. His research has led to significant contributions in a range of related problems, such as urban modeling, motion reconstruction and interactive reconstruction techniques.

In recent years, Andrei has contributed to the global effort of 3D digital city modeling. He has developed a comprehensive set of tools for processing 3D scanned urban scenes. These comprise a broad spectrum of solutions ranging from low-level noise removal and consolidation, alignment, 2D-3D fusion, to high-level interactive reconstruction, simplification, and retarget synthesis.

His work has been published in the top journals and conferences of the field including  Eurographics, ACM SIGGRAPH, ICCV, and SGP.  He has also served on the technical program committees of all leading events in his area.
Andrei is an outstanding individual who will continue to have a profound impact on the field in the years to come.

Eurographics is pleased to recognize Andrei Sharf with the 2012 Young Researcher Award.