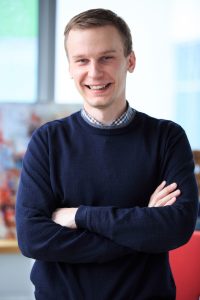 Maks Ovsjanikov’s research work is primarily focused on mathematical 3D shape analysis and robust 3D shape matching. He received his Ph.D. degree from Stanford University in 2011, under the supervision of Prof. Leonidas Guibas. After working on Google Image Search, he recently started as an assistant professor of Computer Science at Ecole Polytechnique in France.

Maks Ovsjanikov is best known for his work on non-rigid shape matching, which has at least two highly relevant applications: retrieval of objects from a large database of 3D models based on their geometric similarity to a query model, and structure analysis of a given object by decomposing it into relevant sub-components based on (generalized) symmetries and self-similarities. Maks Ovsjanikov has published a very good number of papers at the top conferences in the field.

Together with Jian Sun and Leonidas Guibas he introduced the heat diffusion kernel concept as a way to represent the characteristic features of a geometric object in a form that is invariant to isometric deformations. These feature descriptors made it possible to match the dominant shape features of a given 3D character model across different, articulated or piecewise rigidly deformed, poses. Moreover he has made significant contributions to the problem of symmetry detection, by finding geometric sub-regions within a given model that are related by simple geometric transformations from a pre-defined class.

A common theme in Maks Ovsjanikov’s research is a rigorous approach and a reliable handling and matching of dynamic geometry, his matching algorithms being robust to moderate deformations. He introduced notions like the shape condition number, which captures the intuition that some shapes are inherently more difficult to match against than others. He has also used appropriate quotient spaces for shape matching and statistical methods based on the a contrario theory for detecting partial reflection symmetries.

Maks Ovsjanikov definitely belongs to the top group of young high potentials in the area of Geometry Processing. His publication track record is impressive and the impact of his work, measured by the number of citations, is very high compared to peers at the same career stage. Some of his papers, including his work on a provably informative multi-scale signature based on heat diffusion and his publications on global intrinsic symmetries of shapes, isometric matching with the heat kernel and invariant shape retrieval, have become deeply influential research results which have inspired new and recent work.

Eurographics is pleased to recognize Maks Ovsjanikov with the 2014 Young Researcher Award.