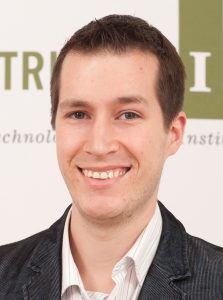 Chris Wojtan received his PhD from Georgia Tech  in 2010. He is an assistant Professor at Institute of Science and Technology in Austria since 2011, where he has established an independent research program.

Chris Wojtan’s work focuses on animation. He has developed sophisticated physically accurate algorithms for complex fluid flows. The main insight in Chris Wotjan’s research is coupling high-resolution embedded surface geometry with low resolution simulations in order to simulate detailed animations of natural phenomena, with results that produce stunning visual images. He has also worked on effectively dealing with topological changes during simulations, and on fluid/solid interactions.

He has designed efficient methods for animating visco-elastic materials with detailed surface and arbitrarily thin features, and for robustly handling topological changes for the resulting deformable triangular meshes, with results that were published at Siggraph 2008 and 2009. In 2012 he presented the first efficient algorithm for tracking and morphing an incoherent sequence of individual meshes with a single, temporally coherent mesh by combining robust multi-resolution non-rigid registration with topology-changing techniques. In 2013, he introduced one of the first practical algorithms for the animation of extremely large-scale liquids, with surface extracted from particles. His algorithm enables efficient, robust and minimally-dissipative simulations that can undergo sharp changes in spatial resolution while minimizing artifacts. He also proposed the first general method for enabling topological changes of arbitrary surfaces — not only solids, being tolerant to a variety of surface aberrations. Afterwards, in 2014, he introduced the first method for blending and interpolating between liquid simulations, enabling to explore a space of plausible results at interactive rates. This includes a first solution to the challenge of finding corresponding space-time features in animations, and is a huge advance towards animation control. More recent contributions include an algorithm for computing pressure corrections to simplify the pressure projection step in fluid simulations in a way that exactly satisfies the free surface boundary conditions while using very few degrees of freedom, and a method for animating water waves through the interpolation of wavefront parameters.

Chris Wojtan has a remarkable career. He is probably the best specialist, worldwide, on liquid simulation. Moreover, he has also solved more general problems on the way, such as enabling general surface topology changes and improving multi-resolution simulation methods. One of his last contributions is a new paradigm towards animation control, which is likely to get a lot of impact and to be generalized to other contexts.

This remarkable research record has resulted on a significant number of high-impact publications., including papers in all main Journals and Conferences in Computer Graphics and animation. He has succeeded in setting up a strong computer animation and simulation group in Austria, also contributing to increase the European research potential in this particular area. Moreover, his present international visibility has been corroborated by the fact that he has already served in many program committees at an early stage of his career.

Eurographics is pleased to recognize Chris Wojtan with the 2015 Young Researcher Award.