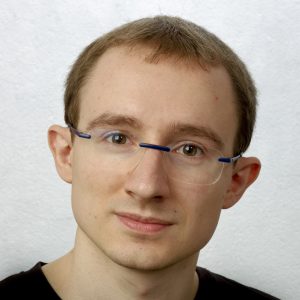 Daniele Panozzo’s research work has focused on digital geometry processing, shape modeling and fabrication, an area of computer science with strong ties to applied mathematics, physics and engineering. His PhD thesis mainly dealt with processing raw acquired 3D data, which is nearly always noisy, unstructured and represented simply by dense point-sampled surface coordinates and irregular mesh connectivity. Such data is hard to process by downstream applications, like modeling software, finite-element simulations or computer animation. Daniele proposed a method for extracting a coarse base mesh that enables approximating high-resolution data by a subdivision surface.

During his postdoc at ETH, Daniele further worked on creating mesh structures particularly suited for computer animation and games, namely coarse quad meshes. Together with colleagues at ETH and Pisa, he co-authored works on sketch-based coarse quad meshing and extraction of such meshes from scanned moving geometry sequences such as human body motions and facial expressions. He has also done some very interesting work on volumetric meshing of self-intersecting surfaces, proposing a new formulation of the problem. This type of work finds increasing applications as 3D data becomes widely spread, e.g. by 3D reconstruction from photo collections and devices like Kinects. Extracting structure from such unorganized data is essential for numerous downstream applications of 3D acquisition and geometric modeling.

Daniele Panozzo’s work has also contributed to the effective and user-controlled modification of freeform geometric shapes, also establishing mappings between different shapes. He has proposed novel algorithms for robust and valid surface and volume editing, where the deformation is defined as a minimizer of a given objective and obeys positional constraints on parts of the shape. Such variational deformations are very powerful shape modeling tools, being also notorious for introducing surface and volume self-intersections. He has proposed novel algorithms that incorporate surface collision response and produce bijective mappings between original and deformed shapes. These co-authored works have been the first ones in tackling the problem in a geometric modeling context and are already finding applications in industry. They have also been applied to digital restoration of historical parchments by the London Metropolitan Archives.

Daniele Panozzo also presented a highly efficient, interactive method to establish a mapping between arbitrarily different shapes by means of weighted averages on surfaces. He extended the so-called Fréchet mean to piecewise-linear surfaces and managed to make its computation extremely fast by using metric embedding in higher dimensions. This contribution is specially interesting from a theoretical, discrete differential geometry standpoint, and it is also highly relevant for practical applications of reusing surface attributes like materials, textures and rigging data by transferring them from one model to another. This is a widely applicable research field in the entertainment industry, as nearly every physically manufactured object today is first modeled digitally on a computer. His research has also focused on freeform shapes, which are especially relevant for artistic expression, the design of medical prosthetics and modern architecture. He has also worked on designing self-supporting masonry structures as an efficient and aesthetic tessellation of self-supporting surfaces. His scheme uses blocks and novel construction methods that minimize support material usage for such structures. Daniele’s approach is able to simplify current workflows while reducing planning and construction costs.

His research work has always been shaped by creativity and technical excellence. Daniele’s work has a solid theoretical foundation while being highly practically relevant. It has been published at the top venues of computer graphics, such as ACM SIGGRAPH and SIGGRAPH ASIA, ACM Transactions on Graphics, IEEE Transactions on Visualization and Computer Graphics, EUROGRAPHICS and the Symposium on Geometry Processing (SGP). Some of his papers are becoming deeply influential research results that will certainly inspire new research work.

Eurographics is pleased to recognize Daniele Panozzo with the 2015 Young Researcher Award.