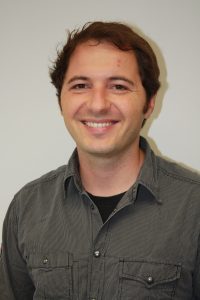 David Bommes is presently an assistant professor in the Visual Computing Institute at RWTH Aachen University. He finished his PhD thesis in 2012, on Quadrilateral Surface Mesh Generation for Animation and Simulation. During 2013 and 2014 he was first a postdoc, and then a researcher in the Titane team at INRIA Sophia Antipolis with some intermediate stays at Caltech’s Applied Geometry Lab as a visiting researcher.

His thesis dealt with the creation of high quality anisotropic quadrilateral polygon meshes. He developed the fundamental concept of Integer-Grid Map Parametrizations which enables the elegant formulation of the quad mesh generation task as a global constrained optimization problem. The method works mostly automatic but still allows the user to control and tune the results by setting and interactively adjusting corresponding boundary constraints. David’s major contributions include an efficient numerical scheme to solve the involved quadratic mixed-integer problems (SIGGRAPH 2009) as well as the derivation of linearized constraints that guarantee the injectivity of the resulting parametrizations (SIGGRAPH 2013). Moreover, he worked on quad layout simplification (Eurographics 2011) and the efficient and precise computation of geodesic distances on polygon meshes.

David Bommes’ scientific focus is on important problems in Geometry Processing, employing solid theoretical foundations in order to achieve results of high practical relevance. Some of his research results have successfully been transferred to industry and will soon be included in several well-known CAD software products. His research interests cover mesh generation, geometry processing, differential geometry, numerical optimization, mixed-integer optimization and the optimization of quadrilateral and hexahedral meshes.

In his highly cited paper ‘Mixed-Integer Quadrangulation’, he proposed a new technique to calculate a quad-mesh with edges aligned to principal curvature directions out of a completely unstructured input triangle-mesh. The beauty of this approach emerges from the fact that both key steps, namely the construction of a smooth cross-field and the parameterization onto a grid domain, can be formulated quite similarly as mixed-integer problems with linear constraints. In his follow-up paper on ‘Integer-Grid Maps’ he added injectivity guarantees to this setup and in his subsequent work on ‘Quantized Global Parametrization’ a novel highly efficient and scalable technique to determine the integer degrees of freedom in the global parametrization step is investigated. His paper on Regularized Curvature Fields from Rough Concept Sketches applies geometric analysis to 2D concept sketches in order to provide meaningfully shaded images of designs.

David Bommes has received already a number of awards, including the best student paper award at Eurographics 2011 and the Eurographics PhD Thesis Award 2013. He has published high impact papers like the ones on Mixed-Integer Quadrangulation and Integer-Grid Maps, co-authored a very well received State of the Art Report on Quad Meshing with some well-known researchers in the field, and regularly publishes at ACM TOG. His scientific contributions significantly influenced and shaped  the area of modern quad-mesh generation and have always been a source of inspiration.

Eurographics is pleased to recognize David Bommes with the 2016 Young Researcher Award.