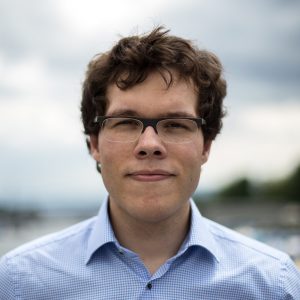 Wenzel Jakob began his studies in Computer Science at the University of Karlsruhe and continued at Cornell University, where he received a Master’s degree followed by a PhD degree in 2013 under the supervision of Steven Marschner. After a postdoctoral fellowship at ETH Zürich’s Interactive Geometry Lab, he recently accepted a tenure-track assistant professor position at EPFL in Lausanne.

Wenzel has a very broad spectrum of research topics to which he has contributed. They range from the efficient simulation of global light transport, subsurface and volumetric scattering and the modeling and rendering of the appearance of highly complex materials to the reconstruction of textile fabric and hair and, very recently, even to the generation of quad meshes. He has successfully used tools from high dimensional geometry and differential geometry to build robust bidirectional light transport algorithms. His work has been published at the major international venues such as SIGGRAPH and Eurographics.

Wenzel’s publications have been widely recognized and cited. They include two ACM Research Highlight papers that have appeared in the Communications of the ACM, in 2014 and 2015. One of these prominent publications is his thesis work on “Manifold Exploration: A Markov Chain Monte Carlo Technique for Rendering Scenes with Difficult Specular Transport” which appeared at SIGGRAPH 2012. The second one deals on building Volumetric Appearance Models of Fabric Using Micro CT Imaging, which is a state-of-the-art example of how algorithms, mathematics and measurement can combine to help our understanding of how fabrics interact with light. His recent work on Instant Field-Aligned Meshes presents an efficient approach to remeshing surface problem. This remarkable technique uses local smoothing to efficiently transform surface meshes into isotropic meshes.

Wenzel has already become an accepted and well recognized international researcher, with a growing number of invitations to give lectures and to join international program committees like at Eurographics 2015 and SIGGRAPH 2015 and 2016. Besides his scientific publications, Wenzel Jakob is also creating impact by investing a significant effort into open source software projects on research-oriented rendering. His most prominent project is the Mitsuba renderer, which is a powerful software framework for physically based rendering. This cross-platform software framework provides and extensive toolbox of algorithms to develop and evaluate new rendering techniques in the context of research projects. Wenzel also holds several patents through the Walt Disney Company.

In his work, Wenzel Jakob has developed and applied intricate mathematical models with solid theoretical foundations, which have achieved significant results, and he is the author of a popular research platform in rendering and appearance modeling. At an early stage of his career, he has already made substantial technical contributions and published them prominently. He has become a well recognized member of the international Computer Graphics community.

Eurographics is pleased to recognize Wenzel Jakob with the 2016 Young Researcher Award.