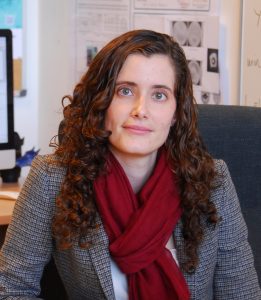 Belen Masia received her MS (2010) and PhD (2013) from the Universidad de Zaragoza where she is now an Assistant Professor.  She was the recipient of a 2012 NVIDIA Graduate Fellowship. In 2012 and 2013, she spent a total of seven months as a visiting student at the Camera Culture Group of the MIT Media Lab, under the supervision of Prof. Ramesh Raskar. In 2015, she was a postdoctoral researcher at MPI Informatik, and a member of the Max Planck Center for Visual Computing and Communication.

Belen Masia’s research combines the areas of computational displays, computational photography, and perception.  Highlights of her work include work on imaging at picosecond resolution, and applying perceptual principles to computational imaging. Her work has produced an impressive number of indexed journal publications and conference talks, including multiple papers in SIGGRAPH / TOG and Eurographics, and several best paper awards. Her very first paper, Evaluation of reverse tone mapping through varying exposure conditions (ACM TOG) presented perceptual studies for reverse tone mapping with a particular focus on under- and over-exposed low dynamic range images. The paper included interesting and strong results that are useful in practice and point to a number of important future research directions, while also defining and executing user studies in a precise way, which is critical for evaluating perceptual questions surrounding imaging applications. Her work on Display Adaptive 3D Content Remapping presents an optimization approach to adapt light fields by depth scaling to reduce blur when rendered for auto-multiscopic displays. The approach of the paper is solid and the results are convincing. Perceptual questions again play an important role and the paper makes clever choices to make the optimization tractable.

Belen Masia most cited work is her paper on femto-photography, presented at Siggraph 2013. This paper made the ACM Best of 2013 list, and has been featured as a Research Highlight in the September 2016 issue of the Communications of the ACM Journal, under the title “Imaging the Propagation of Light Through Scenes at Picosecond Resolution”. This work has contributed to better understand how light propagates, helping to sample (as opposed to integrate over) the time dimension. Applications of transient imaging span a wide range of fields, including medicine, surveillance, material science or, as she demonstrated in a follow-up paper, novel visualizations of relativistic effects.

Belen Masia’s research work also includes the analysis of coded apertures for defocus deblurring, visual comfort when viewing stereo content, interaction paradigms for light field editing, or a novel intuitive control space for material editing. For this, she has built functionals that are able to map the perceptual attributes of materials to an underlying, low-dimensional representation of BRDFs.

Belen Masia received the Eurographics PhD dissertation Award in 2015. She has continued to make significant contributions since then, and has moved beyond work done in collaboration with her advisor, and is now publishing with her own students.

Eurographics is pleased to recognize Belen Masia with the 2017 Young Researcher Award.