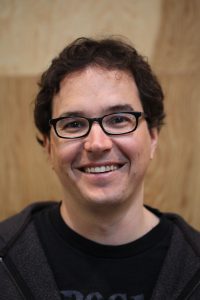 Thabo Beeler started his academic career as a PhD student at ETH and Disney Research in 2009, already focusing on capturing human faces. Three years later he completed his PhD, for which he received the Eurographics PhD award, and started to build up his own group at Disney Research to continue his work.

Thabo has been a pioneer in high-quality human acquisition and modeling. His thesis work significantly advanced the state of the art in human face capture. His first two SIGGRAPH papers on High-quality Single-Shot Capture of Facial Geometry and High-quality Passive Facial Performance Capture Using Anchor Frames have set new quality standards in static and dynamic human face capture. He has since then systematically expanded the scope of acquisition, including capturing of skin wrinkles, facial hair, eyes and eyelids, lips, and teeth. Driven by the goal to improve realism as well as simplifying capture and animation, Thabo’s work combines novel acquisition system designs with algorithmic solutions that are innovative and yield results of very high quality. He has persisted to continuously improve reconstruction accuracy by optimizing both the hardware setups, as well as the underlying geometry and appearance representations and algorithms.

His research has substantially influenced the field of digital humans in general and facial capture in particular. He has demonstrated that it is possible to capture the human face at high fidelity purely from images without the need to augment the face with makeup or resort to structured illumination.

Thabo has now an impressive portfolio of over 25 publications in top-tier venues, including Eurographics, CVPR and ACM TOG. More than half of these publications have been published at SIGGRAPH, averaging at two SIGGRAPH publications per year since his first publication in 2010.

Thabo’s work is not only inspiring researchers around the world, but has also had a significant impact on the visual effects industry. Much of his research has been combined into a large system known as the Medusa Performance Capture Technology. This facial performance capture system has already been used to capture over one hundred actors for more than a dozen Hollywood feature films, such as StarWars, JungleBook, or Warcraft. Medusa is by now the de-facto standard in the visual effects industry for high quality facial performance capture and has also been used for computer games and deployed in theme parks.

Thabo is an avid collaborator who has been able to start and complete joint projects with the leading people in his field. His work is solid and influential, and has had an important impact both in academia and the creative industries. He has gained a strong and indubitable recognition in our community as a world-leading expert in the area of digital humans.

Eurographics is pleased to recognize Thabo Beeler with the 2018 Young Researcher Award.