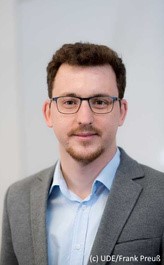 Fabian Beck completed his doctoral degree in computer science at the University of Trier in 2013. Currently, he is an assistant professor (tenure track) at the University of Duisburg-Essen, where he leads a newly established research group on visualization. His quickly growing publication record with many high-level journal publications and peer-reviewed full conference papers indicates that he is among the most active early-career researchers in the European visualization community. With four CGF articles since 2015 and two EuroVis State-of-the-Art reports since 2014, Fabian has made significant research contributions to EuroVis/EG in particular. His outstanding research prospects have already been acknowledged with a Fellowship for Leading Early Career Researchers by the Baden-Württemberg Stiftung. He has attracted considerable funding for visualization-related basic research projects, such as a project funded by the Deutsche Forschungsgemeinschaft (DFG, SoftwareDynamics²) and one by the Baden-Württemberg Stiftung (Visualization–Text Interaction).

With strong contributions to graph and hierarchy visualization, Fabian has positioned himself as an independent researcher and a highly visible member of the international visualization research community. His co-authored publications have helped establish a new way of visualizing dynamic graphs, working with static timeline representations instead of animated diagrams. The advantages are an improved overview of temporal phenomena. His recent work on integrating text and visualization demonstrates the immense, yet largely unexplored, potential of visualization in the interactive interplay with source code, natural-language text, and general user interfaces. For instance, he has demonstrated how combinations of word-sized visualizations embedded into the text of publications can improve the communication of scientific results.

Fabian has set examples that have shaped the format of EuroVis State-of the-Art Reports introduced in 2014. With two such reports he co-authored in 2014 and 2015 (and follow-up extensions in CGF) about dynamic graph visualization and group structures in graphs, he was among the early submitters to this STAR track. His reports have been well-received by the community, as documented by the large number of citations. Special qualities of his reports are comprehensive taxonomies that structure the respective field, consistent visual examples that make the discussed approaches comparable, and expert-interview-based identification of future research challenges. Further, he has set standards for making literature collections of such reports available in easy-to-access literature browsers. He developed the SurVis literature browser and published a systems paper about it at VAST/TVCG 2015. The system is available under an open source license on GitHub and has already been used by several other groups for publishing their literature collections.

Fabian has a strong background in software engineering research. His dissertation already connected core software engineering topics with the latest visualization approaches. He has become a core member and one of the most regular contributors to the software visualization community. His significant role also reflects in his service as program co-chair of VISSOFT 2015 and current steering committee member of VISSOFT. His contributions comprise, among other topics, visualization approaches for analyzing software architecture, software evolution, and program behavior. Building and maintaining such bridges to related communities is a challenging, but highly important service to the visualization community.

In general, Fabian has been taking an active role in services for the visualization community. He has served as program committee member for EuroVis and for other conferences such as VAST, PacificVis, GD, and VMV. At BDVA 2016, he received the best reviewer award. He is one of the program co-chairs of the EG-associated event VMV 2018 and co-organizes a GI Dagstuhl Seminar on “Visualizing Systems and Software Performance”.

EuroVis is pleased to recognize Fabian Beck with the EuroVis Young Researcher Award 2018.