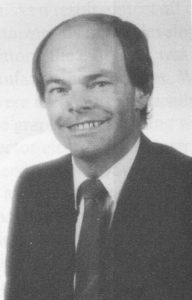 Günter Enderle died in hospital on 13 January 1987 following a tragic road accident. Günter’s untimely death has robbed the world of a great engineer, computer scientist, manager and most of all personality.

Günter’s technical career began in 1971 at the nuclear research centre in Karlsruhe, West Germany, where he was involved in a large number of projects in the CAD area. During this time he was also a lecturer at the University of Karlsruhe. He left Karlsruhe in 1984 to take up a senior position in industry, Technical Manager for Engineering Software Development at SEL, a subsidiary of ITT.

Günter made a deep and lasting contribution to the development of standards for computer graphics. He was involved in the development of GKS from the earliest days and became chair- man of the DIN graphics standards committee in 1981. He was a very well-known and well- respected ï¬gure in the ISO graphics working group, first as a technical expert and latterly as head of the German delegation. Günter was one of the authors of “Computer Graphics Programming” (Springer Verlag), one of the ï¬rst and most respected books on GKS to appear in print.

Günter has also made an enormous contribution to EUROGRAPHICS. He was an Editor of Computer Graphics Forum since its inception and contributed a number of articles on graphics standards. He became Chief Editor in November 1983, a position he retained until the end of 1986 when pressure of work forced him to resign. Gunter was also series editor of the Euro- graphic Seminars series, published by Springer Verlag, a venture which was his initiative and which has acquired a high technical reputation through his drive and determination. He was also a member of the Executive Committee of EUROGRAPHICS and an obvious future chairman.

But what of Günter the person? I first met Gunter through graphics standards activities and came to know him as a close friend during the time we worked together producing Computer Graphics Forum. Our ï¬rst meeting was in 1981 when he came to the Rutherford Appleton Laboratory to give a one-day tutorial in English in GKS. He impressed me greatly, both in the depth of his technical knowledge and the clarity of his presentation in a foreign language. I will long remember our working weekends in Amsterdam producing Computer Graphics Forum. Often working until the early (or not so early) hours of Sunday morning, Günter would insist on break-fast at 8.00am so that we could be back at the terminals before 8.45! It was to my great relief that our hotel did not serve breakfast before 8.00am!

I remember also the excellent contributions he made to social events at ISO meetings, including his recitation of a certain Dutch poem in German on a canal boat, and his role as chair- man of the “GKS Validation Committee” at the Timberline meeting.

Outside computer science, Günter was a keen alpine skier, mountaineer, and wine maker.

My deepest memories of Günter are of the dinners we had together at hotel Damrak in Amsterdam. We used to go there in celebration at the completion of every issue of Computer Graphics Forum. The menu was always the same, mushrooms on toast, pepper steak, coupe Dam- rak and coffee, supplemented by a Trocken Weisswein. The conversation was deep and far- ranging as we relaxed at the birth of one baby and prepared for the next.

Günter will be missed greatly by his many friends and colleagues. At the top of the agenda for the next Executive Committee meeting will be how to provide a lasting memorial to Günter. In the meantime let this obituary stand as a tribute to my friend and colleague. To his family we extend our deepest sympathy. Requiescat in Pace.