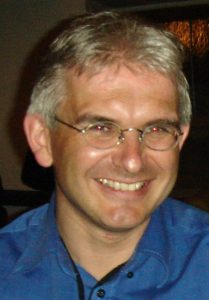 Dirk Bartz died on March 28, 2010 while running a half marathon in Berlin. The international computer graphics and visualization community lost a great colleague and friend and expresses the deepest condolences to his family.

Dirk Bartz was born on July 22, 1967 in Simmern/Hundsrück in Germany…

I got to know Dirk at my first attendance of an IEEE Visualization Conference in 2001 in San Diego. For Dirk, it was already his sixth “Vis”. Dirk had a broad interest and substantial experience in medical visualization, exactly the same specialty I was also interested in. Besides having similar interests, I was fascinated by the kind and friendly personality of Dirk.

At that time, I was researcher at MEVIS in Bremen. Soon thereafter, Dirk visited us and presented the work done in Tübingen at that time. Later, he offered me the opportunity to give a talk in the famous “Friday” colloquium in Tübingen, organized by Wolfgang Straßer. One thing I noticed during the whole time since then is that Dirk cared very intensively for his students. He let them present their results, he did not interrupt them, and he was interested in them as personalities even long after they had left the graphics lab.

Since that time we collaborated at various occasions. Dirk strongly supported the idea of building a German Interest Group on Medical Visualization and took actively part during the whole time giving advice to many PhD students, among them the PhD students of our group. Dirk organized many tutorials at IEEE Vis, Eurographics, and CARS. For me, not being that strongly involved in the Vis-community he opened many doors and provided opportunities to contribute. In 2005, I was very glad that Dirk joined the effort of writing a textbook on “Visualization in Medicine”. For an 18 month period, we communicated daily on the various aspects of the book. It was enlightening and a pleasure to discuss with Dirk all the time. He was always perfectly reliable and good-humored, even in situations where he had a very high workload.

At the end of 2006, Dirk became appointed Professor for Computer-Assisted Surgery at the International Center for Computer-Assisted Surgery (ICCAS) Leipzig and started to build a new research group. In continuation of his work in Tübingen he focused on visualization techniques, such as illustrative rendering, perceptual studies (from Dirk I learned the term “psychophysical studies”) and applications in neurosurgery and ENT surgery. His group consisted of two female and one male PhD students, which was typical for Dirk − the support of female researchers was an important issue for him. From his own many contributions to medical visualization in particular his research in virtual endoscopy should be mentioned.

Dirk was extremely active in various organizational committees. In particular, he has been a member of the Eurographics Data Visualization steering committee since 2003. Over the last 15 years, he has been involved in almost every visualization event in several ways. A visualization event did not seem complete without him. He was also a driving force behind the EG Parallel Graphics and Visualization symposium. Dirk belonged to the core team that established the new workshop series “Visual Computing in Biology and Medicine”. It was quite natural that Dirk hosted the second event, scheduled to take place in July 2010 in Leipzig. Until the very last days of his life, he discussed strategies for this workshop.

At conferences, Dirk impressed me by always having his sneakers with him and taking opportunities to jog. Another routine for Dirk was to establish Skype meetings, e.g. during conference breaks, with his dear wife Heidi and his children, in particular with Robert, who became 3 years old last winter. It was extremely important for Dirk to always keep in close contact with his family. During one of his favorite activities – running half-marathon in Berlin, what he did several times before – he collapsed and passed away on March 28.

It is sad to say farewell to him at a much too early age of 42, to a likeable and caring person, and we wish his family, his many friends, students, and colleagues all the strength they will need to recover from this loss. We will remember him as a very good friend and colleague, and a diligent worker for building and maintaining the visualization community in Europe. He was also a dedicated husband and proud father of two small children and it is hard to conceive how they can continue without him.

Dirk’s research interest were in computer-assisted surgery, visual computing, perception, medical imaging (segmentation, registration, filtering, etc.), visualization, computer graphics, augmented reality, interaction, applications in medicine and life sciences. His contributions range from virtual endoscopy to parallel volume visualization, from occlusion culling to stylized rendering, from augmented reality to surgery planning. He was the co-author of more than 160 publications, many of which are highly cited, including the landmark text book “Visualisation in Medicine. Theory, Aalgorithms, and Applications”. Dirk was also a dedicated teacher and presenter giving classes, tutorials, and talks at several universities and conferences worldwide. Many of the numerous students he had been supervising have already started their own careers. Dirk was a remarkably active volunteer in the computer graphics and visualization community. Already in 1998 he chaired the Eurographics Workshop on Visualization in Scientific Computing (which is now known as EuroVis). Later he became a member of the steering committee of the EG Working Group on Data Visualization. He was a driving force behind the EG Symposium on Parallel Graphics and Visualization and he was instrumental in creating the new EG Symposium on Visual Computing for Biology and Medicine. He was also active for many years in the ExCom of the IEEE Technical Committee on Visualization and Computer Graphics.