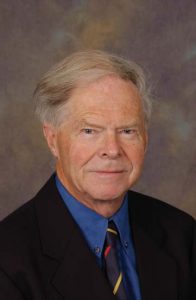 Dick Grimsdale, fellow of the Eurographics Association, died on December 10th, 2005. There was a funeral service at the Meeting House on the University of Sussex campus on December 15th. Unsurprisingly to those of us who knew him, it was very well attended.

Dick was a quiet and modest man whose influence on computing and computer graphics runs deep. His early years at the University of Manchester involved him closely with the fast developing world of computer technology. Appointed to an assistant lectureship in 1951, during Tom Kilburn’s time at the helm, he moved on from improving the valve Manchester Mark II to create the world’s first transistor computer and ran the first program on it in November 1953. This machine was later made available as the MV950, believed to be the first transistor machine in commercial production. He also worked on Atlas, the most innovative computer of the era, which had most of the features later to be thought of as standard. Dick worked on the read-only memory, based on a wire mesh 8 by 4. This had a capacity of 8 K words of 52 bits and an access time of 100 nanoseconds. In this period too, he worked on EDSAC at Cambridge and, back at Manchester, told Alan Turing that his character-coding scheme was complex. In 1961, he joined AEI, a year later being a founder member of AEI automation, set up to sell computer systems for industrial monitoring and control applications. Among other installations was one to monitor alarm signals at a nuclear power station, near Bristol. When alarms went off, there tended to be many at once and the software looked at the overall pattern and recommended a course of action. This was an early expert system.

He returned to academic life in the mid 1960s, becoming Professor of Electronics in the newly-formed School of Applied Sciences at the University of Sussex. Sussex itself was the first of the new UK universities created in that decade, to provide much-needed expansion in higher education. It was a vibrant and lively place, as I know from personal experience as an undergraduate student from 1968 to 1971. It was also the most radical (in the true sense of the word) of all the UK universities, never fearing to try new approaches to its teaching and its governance. Those of us touched by that spirit have never since been satisfied with cautious approaches. Dick would have been at the heart of creating that new School. His little-known care of students in his own home, especially those going through personal crises, was dependent greatly the support of his wife Shirley.

Dick had two great research interests, in networks and in computer graphics. I first met Dick when I responded to an advertisement for a DPhil studentship, to work on packet switched networks. He had me signed up on the same day as the interview, not bad for someone like me who had already vowed to leave university behind forever. When I reported to his office, on my first day in the new role, he asked which project I wanted to work on. Not aware there was a choice I asked him what the options were. He described one in graphics hardware and one in networks. Graphics sounded more fun so I chose that and thus did Dick set me on the direction of my own career. What we worked on was hardware to produce real-time moving daylight scenes for flight simulation. This later developed into an integrated version, part of the Esprit workstation and the basis of a long and fruitful collaboration with Wolfgang Straßer of Tübingen. They were both strong supporters of the then new Eurographics Hardware Workshop, which is now one of the most respected of EG Workshops.

Dick always had time for you: knock on his door and he would stop whatever he was doing and spend an hour or more with you, sorting out the problem that was worrying you. After my DPhil was completed I stayed on as Dick’s research assistant, where we worked in the same area, patenting a display processor and also looking at other real-time display problems associated with maps. I finally left Sussex in 1979 but have been back many times since. One thing never changed: knock on his door and he would welcome you for as long as you cared to stay.

Dick took a great interest in his ex-students. I had proudly worn my Sussex scarf into holes. On one visit to him I said I wanted to buy a new one, so we went to the campus shop. I got my scarf but he proudly told the bemused assistant that I had been one of his students and that I was now a professor. This touching humanity was a feature, so in turn I took care to tell him that he had become an academic grandfather, when my own research students got chairs.

He leaves behind his wife Shirley, his daughters and his grandchildren. He also leaves behind a reputation as a sensitive and thoroughly nice man, who tackled energetically all that he did but who worked quietly behind the scenes rather than seeking visibility. He made a real impact on the lives of many of us and on the Association. We will all miss him.