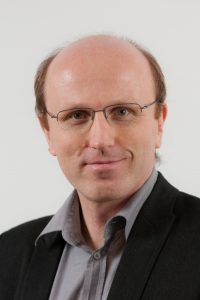 With deep consternation and mourning we received the message that Robert Tobler died in a sailplane crash on Sunday, April 3, 2016, in Mussen in Kötschach-Mauthen (Carinthia, Austria). Robert was one of the most intelligent and dedicated students of computer science at TU Wien when he graduated as Diplom-Ingenieur at the age of only 22. Already then he was very interested in computer graphics, and his daily proximity to our institute inspired us to found the Computer Graphics Club, a group of very engaged students of computer science that are closely integrated into the Institute of Computer Graphics. Robert Tobler was its first member!

After graduation he received a Fulbright scholarship to study at Stanford University, USA, where he received a Master of Science in Computer Science. After his military service and half a year at IBM Vienna, he joined the Institute of Computer Graphics at TU Wien for six years as assistant professor, in which time he also received a PhD degree. In the beginning of 2000 he became the first employee of the newly installed VRVis Research Center in Vienna, where he worked as Senior Scientist ever since. In addition he taught regular graduate courses at TU Wien with excellent evaluation marks. In 2015 he completed his habilitation, of which he was very proud. Robert Tobler left us numerous well-cited research papers, and he was a well-known and well integrated colleague in the international Rendering community.

Conversations with Robert normally ended in one of four topics: his programming tricks and software engineering solutions, his cameras and photographs, classical music and his CD collection, or his sailplane and the multi-hour trips he did with it. In all these topics you could feel an intense enthusiasm and dedication. His motto for almost everything was “do it perfectly or let it be”. And so he lived with and for his hobbies, of which his job was an essential part. Unfortunately, one of his hobbies included incalculable risks which he did not survive. The solace remains to know that he enjoyed his last hours in his beloved sailplane. But we now have to live with a big hole he leaves behind, at his workplace where he was one of the driving forces, as well as in our hearts because he was a very special person in many ways.