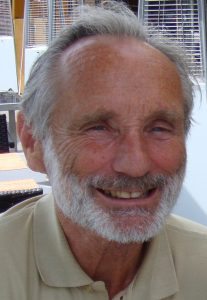 Wolfgang Straßer was one of the pioneers in computer graphics who shaped the field in Germany and beyond. An important theme in his work was the development of novel algorithmic solutions, taking into account the capabilities and perspectives of modern graphics hardware. He also emphasized the systems aspect and was never shy to tackle applications.

Independently of Ed Catmull’s work, Wolfgang Straßer’s dissertation already contained a description of the z-buffer algorithm back in 1974, i.e. right at the advent of raster graphics. Other important results are his algorithms for efficiently rendering freeform curves and surfaces, taking into account graphics hardware, and in particular his work on antialiasing. Today, these algorithms are common knowledge. In order to fully appreciate Straßer’s contributions, one has to recall that his work dates back to the days when interactive graphics applications, and in particular raster graphics, were widely unknown.

Wolfgang Straßer was born in Metzingen on August 10, 1941. He studied telecommunications at TU Berlin and received his “Diplom” in 1969. In the same year he married his wife Hiltrud. Together they raised four children.

In 1974 Wolfgang Straßer received his PhD from TU Berlin with a thesis titled “Schnelle Kurven- und Flächendarstellung auf graphischen Sichtgeräten” (“Fast Generation of Curves and Surfaces on Graphics Displays”) (Advisor: Wolfgang Giloi). Subsequently, he chaired the imaging group at Heinrich Hertz Institute. In 1978 he was appointed to the faculty of TU Darmstadt, Interactive Graphics Systems Group, as an associate professor. Together with José Encarnação he established Darmstadt as an internationally leading center for computer graphics research.
In 1986 Wolfgang Straßer accepted an offer for a chair position from the University of Tübingen. His chair became the nucleus for the „Wilhelm Schickard Institute for Informatics”, and eventually the Tübingen computer science department. Wolfgang Straßer started the graphics group in Tübingen from scratch and immediately established it as one of the premier research groups in the field. A characteristic trait of his research was the close interplay of algorithmic contributions with graphics hardware. His group made important contributions in a variety of areas, including medical imaging (Tübingen MEDStation), physically-based modeling and visualization of textiles, and the processing of very large 3D scenes (cut-border machine for mesh compression, progressive transmission of light fields, output-sensitive rendering). Straßer published his work in top venues, and his research had a profound impact. Several honors and awards (Eurographics Fellow (1991), honorary doctoral degree TU Darmstadt (2000), Eurographics Honorary Fellow (2009), Chair Eurographics Fellows (2012)) attest to his special standing in the community.

One reason for the positive response to his work definitely stems from its high applicability: Wolfgang Straßer was always open for problems from industry and actively pursued technology transfer (Steinbeis Transfer Center for Computer Graphics 1995). Several start-ups clearly attest to the success of this philosophy. His textbook „Graphische Datenverarbeitung“ (co-authored jointly with J. Encarnação, and later R. Klein) became the standard textbook in Germany. Perhaps more than anything else, his influence on the field is documented by an exceptional number of researchers who emerged from his group (45 doctoral degrees, 8 habilitations) and now hold leading positions in industry and academia themselves (including 19 faculty members at universities (Hochschulen) and universities of applied science (Fachhochschulen)). He initiated the annual HiGraphics meeting with its special flavor of a winter school, and the role of this event as a meeting and discussion point between graduate students and established scientists cannot be estimated high enough.

Wolfgang Straßer was a founding member of the subcommittee on computer graphics within the German Informatics Society (GI), and he shaped policy within this body for several decades. He started the highly successful Eurographics/Siggraph Workshop Series on Graphics Hardware in 1986 and turned it into the premier event in this field in the world. Following retirement, he stayed active in the community, e.g., as chair of the Eurographics fellows.

With Wolfgang Straßer the computer graphics community loses one of its early pioneers, a remarkable scientist, a great mentor, and a precious friend.